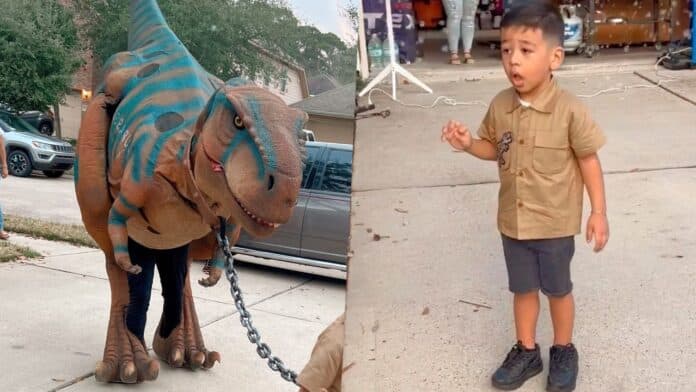 A dinosaur-loving three-year-old froze in shock on his driveway when his parents walked a “real-life” T-Rex towards him into his birthday party.

Casen Fontenot’s jaw immediately dropped once he saw his family members walking alongside the giant dino towards him – a reaction that quickly went viral on social media.

Rather than opting for one of the mass-produced T-Rex costumes that have become popular in recent years, mom Daisy rented an entire “Dino Experience” – meaning the T-Rex was far more realistic and looked like something out of Jurassic Park.

As the dinosaur came closer, held back by a chain, Casen’s frozen reaction turned to jumps of joy, as he leaped up and down with delight.

READ MORE: Neighbors Learn Sign Language So They Can Sign Happy Birthday To Boy Who Is Deaf

The moment took place at the Fontenot family’s house in Baytown, Texas, on March 6.

Casen’s love of dinosaurs started when he began imitating them, Daisy said, and he is constantly seen running around their house trying to be one.

So for her son’s birthday she knew she had to plan something special – though she did admit that she was initially hesitant that the rented T-Rex might look a little too real.

All those worries went away, though, when the family saw Casen’s reaction.

She said: “In the moment, I remember thinking ‘Here goes nothing; he’s either going to be really upset or really be excited.’

“It honestly was a gamble, but I know how much he loves dinosaurs, so I was hoping he’d be happy.

“His reaction was so much more than what his dad and I expected.

“We replayed the videos over and over reliving the moment with him, and even watching back he still gets excited.

“I hope the moment reminds parents that you don’t have to wait for them to be older to make special memories.

“My son may or may not remember this moment when he is older. But I will, his dad will.

“We will forever be able to see his little face, his excitement, the way he was shocked but also extremely happy.

“Those moments are what parenthood is all about. Make all the years count.”