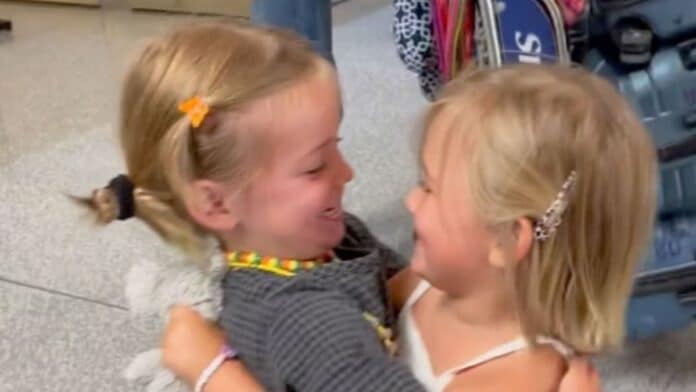 A pair of sisters captured the wholesome moment their best-friend 3-year-old daughters reunited after months of being apart – with one running through the airport to hug the other before gifting her a friendship bracelet.

Cousins Blue and Pearl are actually closer in DNA than half-sisters, as both their moms, Sophie and Amandine d’Huij, married twin brothers Adriano and Luca.

The families live in San Francisco, California, in the same building as one another but different apartments.

As a result, Blue and Pearl have been extremely close growing up, spending hours on end playing together.

But when Amandine, Pearl, and Luca headed off to Holland to see Amandine’s family, it dawned on the sisters that this would be the longest time Blue and Pearl have ever been apart.

In total, the super-close cousins were separated for three months, with their reunion then taking place on July 19, in San Francisco Airport.

Amandine recorded Pearl’s reaction as she headed out through the arrivals gate and ran into her cousin’s arms.

Meanwhile, Sophie captured the wholesome reunion between the pair from the other side, with Pearl then presenting Blue with a friendship bracelet.

Sophie, speaking of the reunion, said: “It was longest they have ever been apart because we have all always lived next door to each other.

“Blue had made a sign because she was so excited to see Pearl.

“They both got jewelry-making kits from their grandmother and they each made the other a bracelet.

“We were emotional and so grateful that they have each other.

“We also felt guilty that we had kept them apart for three months and realized that this is a special bond.

“I hope the video brings some joy into people’s lives – especially now during these difficult times.

“I hope it reminds people that we are all human and love can overcome anything.”