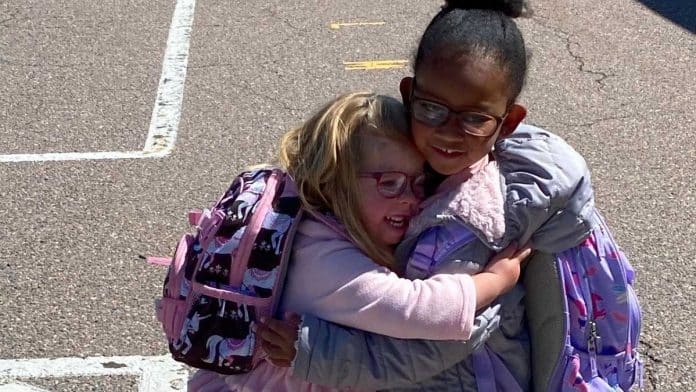 A pair of pre-schoolers have warmed hearts online, after a video of their wholesome morning greetings went viral.

In the adorable footage, Grace McInerey, 3, can be seen running across the playground into the arms of her best friend, Harper, before sharing a long hug.

The two girls then trotted into Indian Ridge Elementary School, Centennial, Colorado, with three-year-old Grace turning around to wave good-bye to her mom along the way.

In explaining the girls’ friendship, Grace’s mom, Courtney, mentioned that her daughter was born with Prader Willi Syndrome, a rare genetic disorder that causes her to have a slight speech delay.

As a result, Courtney was worried Grace would struggle to make friends when she joined pre-school in January – but Harper made sure that wasn’t the case.

Those in her class welcomed Grace with open arms, calling her Little Gracie because she was the youngest member.

Grace’s bond to Harper grew deeper when she discovered Grace needed glasses, Courtney said that would mean she looked just like her best friend, which Grace loved.

READ MORE: Preschoolers Choose How They Greet Each Other Every Morning In Adorable Routine

Courtney captured the video of the pair’s morning routine on April 27.

Viewers on social media commented to say how warmed they were by both the girls’ friendship and the inclusive message the story sends.

Courtney said: “I thought it was the cutest thing in the world, and it really made me feel so good that she had a friend.

“Grace started the pre-school in January, when she turned three.

“I knew she would love it, but she didn’t have many words [in her vocabulary] when she started.

“I was nervous she wouldn’t make friends. But I have heard Harper helping Grace to say a few words.

“Grace has become obsessed with her. She wants to go to school to see her every day.

“I thought I caught the perfect moment.”