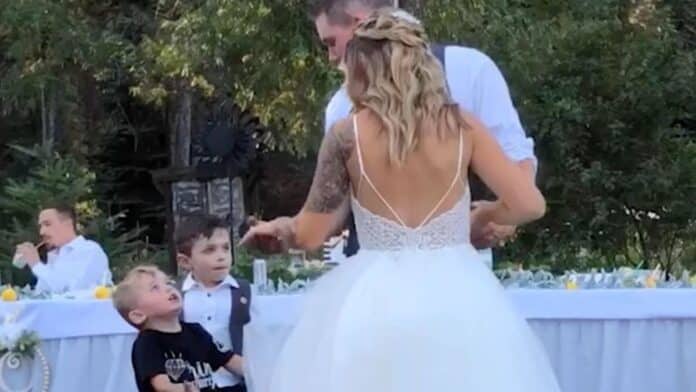 A pair of newlyweds said that they could not be mad at their four-year-old son after he accidentally ruined their first dance by asking them to check out a bug he discovered.

Right in the middle of their routine, Autumn Barnes, 25, and Nick Owen, 24, were joined on the dance floor by their son, Braxtyn, who was trying to draw their attention to something in the distance.

Braxtyn prodded and poked at his dancing parents, asking them if they could come and check out a giant bug he and his partner in crime, Holden Anderson, 5, had discovered.

Autumn and Nick took the moment in their stride, laughing about it as friends and family also watched on in amusement.

The wedding took place at Autumn’s mom’s house, in Rathdrum, Idaho, on June 24, and after Braxtyn’s initial persistence, his uncle, Rob Henrick, went with the four-year-old to investigate.

There, Rob discovered it was actually a bee that Autumn and Nick’s son was trying to show them.

The couple’s friend, Lindsey Surber, captured the moment on video and later encouraged the couple to upload it to TikTok.

Not expecting the post to take off, Autumn and Nick were later shocked when the post went viral.

READ MORE: Baby Goes Viral As He Giggles With Joy When Pet Cat Decides To Wash His Hair

Autumn said: “When it came time to do our first dance, my husband and I were not ready as we both are not the greatest dancers.

“We were already laughing during our dance, and then our son came from the backyard to tell us about a bug that was in the bounce house – it couldn’t have had better timing.

“It made the whole dance.

“His uncle Rod Hendrick went out to the bounce house with him and discovered it was a bee he was trying to show us.

“When Lindsey texted me and told me she had the cutest video from our first dance, she told me I should post it and watch it go viral.

“I shared it to TikTok, and within 24hrs it blew up – I’m at almost one million views.

“The feedback was been phenomenal, with so many people thinking it’s just adorable what he did.

“I hope that people can take with them the joy, love, and laughter a child can bring to a wedding. “This was one of the greatest highlights to our wedding day.”