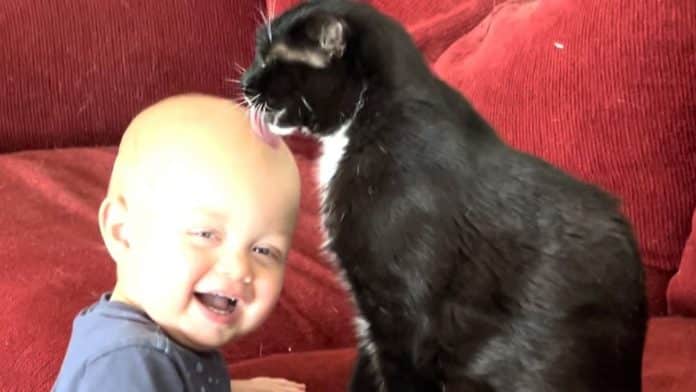 An 18-month-old baby has gone viral after his mom shared an adorable video of him giggling as their family cat attempted to wash his hair.

In the cute video, Jack McArthur can be seen standing next to a sofa as the family’s cat, Xedo (pronounced Zee-doe), proceeds to lick his head.

The cat’s actions caused Jack to giggle with joy as his mom, McCall, 30, from Salt Lake City, Utah, recorded the funny moment.

McCall later shared the video online, and it soon received nearly one million views and a number of well-wishes.

According to McCall, Jack loves the family’s two cats, but this is not something Xedo had ever done before.

Jack is still learning to interact with animals, McCall said, and so on this occasion, when she heard her son giggling, she decided to inspect and record the moment.

Since then, McCall has shared a number of other videos of Jack and Xedo learning to interact together.

McCall said: “On this day, I was hanging out in my kitchen while Jack played on the couch.  “I heard him quietly giggling and I looked over to see Xedo licking Jack’s head and he was loving it!

“I immediately started to record on my phone because it was the first time Xedo had shown any affection – especially like that – towards Jack.

“I was definitely not expecting the video to reach almost a million views in less than two weeks, as well as gain traction in 5 other countries.

“It was a fun little moment for our family, and I’m looking forward to showing him the video when he’s a little older and telling him the whole story of how he got ‘famous’ at one and a half.”