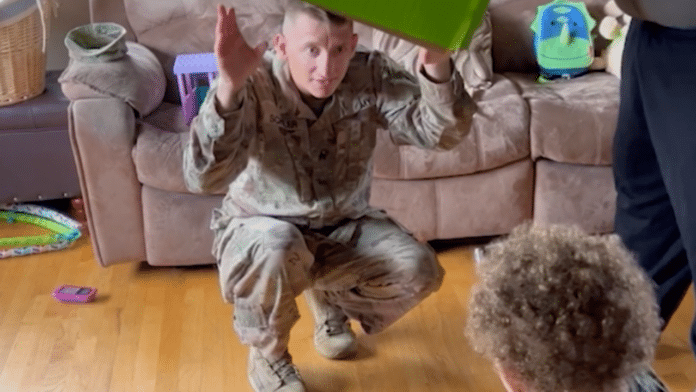 An excited toddler jumped for joy when he opened a giant present to discover his military dad, who had been serving overseas for more than 11 months, almost half the youngster’s life.

As the box was lifted and two-year-old Kayden Schuler caught a glimpse of his father, Sergeant Cody Schuler of the U.S. Army, he immediately began to jump up and down on the spot with delight.

Following the initial excitement, Kayden then headed over to his father, 37, for a long-awaited hug, which came at the end of a 315-day separation for the pair.

Cody left on June 24, 2021, for Kuwait – the family’s second deployment, but the first with a child.

The feeling of missing a child made the time overseas extra difficult, Cody said.

When he got the news that he was set to come home, though, Cody knew that he wanted to surprise his son, who, every time he saw a military truck or vehicle similar to Cody’s while his father was away, would shout, “Dada! Dada!”

Cody’s wife, Kirby, picked him up from the airport, and after finding a box that was big enough, the couple – from Seattle, Washington – headed to Kirby’s parents’ house, where Kayden was then brought into the other room while the surprise was prepped.

The moment took place on May 6, 2022, with Kirby capturing Kayden’s joyous response on video.

After the surprise, Kirby, who shared the footage on social media, admitted that such military reunion videos helped her get through the previous 11 months, knowing that someday she would have such a reunion.

Speaking of the moment, she said: “Kayden’s reaction was a surprise to us all, and I really don’t think there were enough tissues to handle all the emotions.

“Military surprises and homecoming videos really helped me a lot while Cody was away.

“Knowing that I would get to experience that moment of joy and happiness soon was something that got me through.”