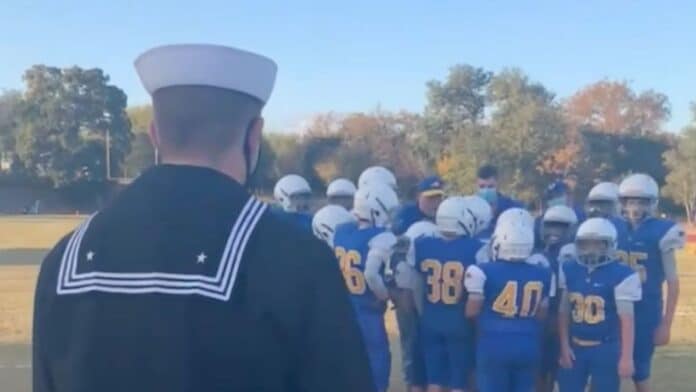 An emotional 12-year-old burst from his middle school football team’s huddle when he noticed a familiar figure heading across the field to surprise him.

Ryan Mills had not seen his brother, Gavin Walters, 19, for five months, as Gavin had previously been in A School, training as part of the U.S. Navy.

After the 19-year-old walked across the Bobcat Stadium field, in Medina, Texas, he was about to reach the huddle when Ryan came running through the crowd.

The two brothers then shared a tear-filled embrace as coaches and players surrounded them and applauded.

After completing A School, Gavin was granted leave, so planned to replicate other military surprise videos he enjoys watching on social media.

Speaking of the moment, which took place on November 6, 2020, Gavin said: “It couldn’t have gone any better.

“It was a wholesome feeling seeing him again and getting to hold him in my arms.

“I sobbed – it was unlike anything I had experienced before and him crying just made me cry even harder, but they were tears of joy through and through.

“The video itself had an amazing response from the public.

“I had so many people commenting, ‘Thank you for your service,’ or, ‘This made my day’ – stuff like that.

“A good message to someone watching the video is to stay positive no matter what because you never know what tomorrow is going to bring.”