Home Good News Mom Berating Son Over The Phone For Not Returning Her Call Gets... 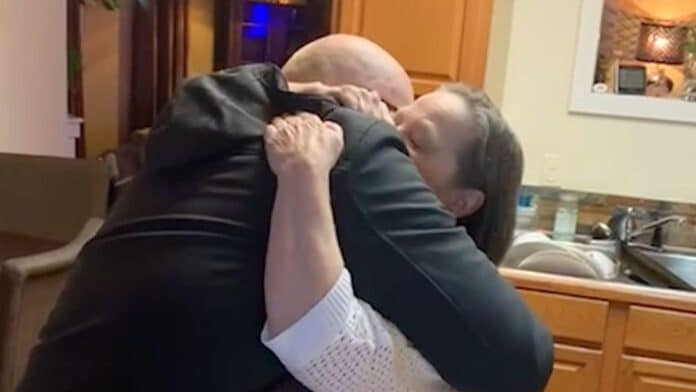 A son who was getting berated on the phone by his mother for not returning her call gave her quite a shock when she opened the door to see him standing there.

Patria Lucas, 64, put her hands on her head in disbelief as she heard a knock at the door and opened it to find Kris McMeekin, 47, standing there on November 3, after he traveled thousands of miles to surprise her.

Kris lives in St. Catharines, Ontario, Canada, while his mother lives in Cloverdale, British Columbia, more than 4,000km away.

Originally, Kris had been planning a trip to California with his friend, Moe, but when that was canceled last-minute, the pair decided to visit another friend in Kelowna, B.C. – which worked out well for Kris, as he could also visit his mother.

Having not returned a call from Patria from a few days earlier, Kris thought that would provide the perfect foil for his surprise.

Standing on his mother’s driveway, Kris called Patria back as Moe recorded the moment.

Patria thought her son was at home in Ontario, scolding him for not returning his mother’s call.

Then, Kris headed around the house and knocked on the door, causing Patria to put Kris on hold as she went to answer.

Moe captured the moment on video, which Kris later shared on social media with his friends and family.

The canceled California trip and the visit to Cloverdale turned out to be a blessing in disguise, Kris said, as while he was in Kelowna his mom had a mini-stroke, so he felt like the trip had happened for a reason.

He said: “Her reaction was priceless. She was so happy, and, of course, I was too.

“It’s so hard living away from your family and only seeing them every few years – just talking on the phone isn’t enough.

“If there was anything I’d like to say or like to come out of this, it would be to hug your loved ones and keep them close.

“If they are far away right now, then hopefully after watching this video someone will be picking up the phone and calling them and telling them how much you love and miss them.

“This trip was a blessing in disguise. While I was in Kelowna my mom had a mini-stroke.

“It was like I was meant to go on this trip to see her.

“The universe works in mysterious ways that’s for sure.”