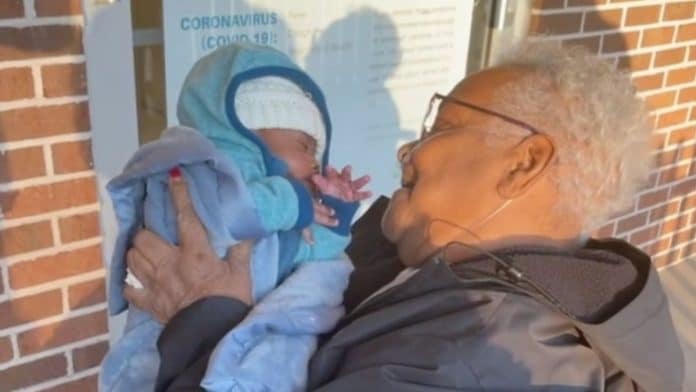 A loving grandmother finally holds her great grandson for the first time after a tough battle with COVID-19.

Viola Gordon, 75, planned to visit granddaughter Tanayja Williams, 23, the week she was due to give birth but just two weeks prior Viola tested positive for COVID-19.

As a result, she was forced to remain in hospital while Tanayja, from Greenwood, South Carolina, gave birth to baby Jarryd.

Over the weeks that followed, Tanayja and her family worried about Viola’s health, as her grandmother remained in hospital.

Eventually, having not seen her grandmother for more than three months, Tanayja was able to visit her at Edgefield Nursing Home on February 17 – with a little surprise in store.

Viola had no idea her great grandson, now a couple of months old, was coming as well.

Tanayja recorded the loving first meeting between the two, where, outside her nursing home, Viola beamed as she held Jarryd in her arms.

Tanayja said: “We drove for more than an hour to surprise her with her first great grandson.

“It was overwhelming – we fought back so many tears seeing her kiss and love him and it was like her spirit lifted up as soon as she held him.

“We’ve gotten so much positive feedback, and so many people were so happy to see the moment, saying they felt like they were there.

“My grandmother still has a long road ahead of her, but as long as she sees her great grandson, nothing else matters – Jarryd is definitely her motivation.”