Home Good News Dog Mom Worried Her Husky Puppy Would Forget Her While On Deployment... 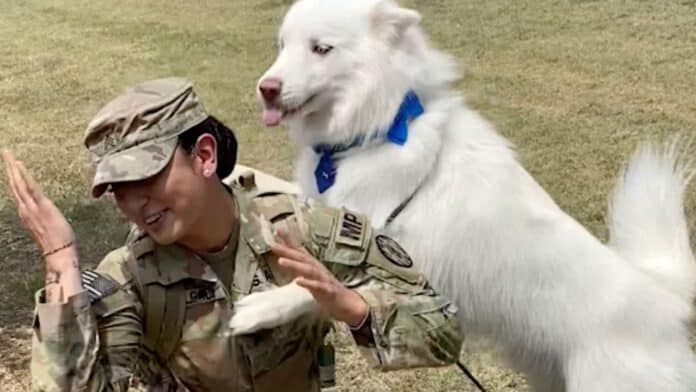 An adorable husky who was just a puppy when his military mom was deployed overseas can’t stop wagging his tail and jumping for joy as the pair are finally reunited after nine months.

Jasmine Delgado, 22, a Sergeant in the U.S. Army, was initially worried her one-year-old Siberian husky named Bolt might not recognize her by the time she returned home.

For the previous nine months, Jasmine, from Houston, Texas, had been station across Europe, and so Bolt went to stay with Jasmine’s mom.

READ MORE: Former Marine Adopts Dog Who Helped Protect Him And Others From Bombs In Afghanistan

But all doubts went out the window on July 28, when a delighted Bolt couldn’t hide his excitement at finally seeing his adoring owner after so long apart.

On the day of the reunion, Jasmine said she saw Bolt and her mom walking towards her from a distance, and as soon as Bolt realized what was happening couldn’t control his excitement.

When he finally got close to Jasmine, the Siberian husky jumped all over his owner and licked her as Jasmine came down to Bolt’s height for a hug.

Jasmine said: “I was excited but also really nervous because I wasn’t sure if he was going to remember me, as I had been gone for so long and he was a puppy when I left.

“The response to the video has been so positive and uplifting.

“A lot of people said it made them shed a few tears, and everyone has been really sweet and welcoming of me coming home, too.”