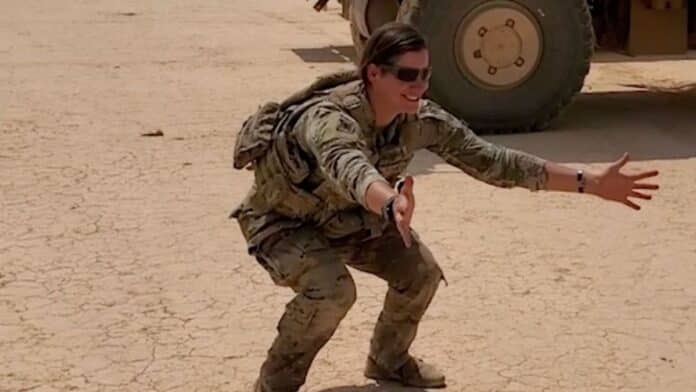 A military mom kept both her and her kids’ spirits up during the year they were apart by recording herself practicing her reunion hug before returning to surprise them with an emotional embrace.

Laura Strzelecki, 33, recently shared footage of both her surprise reunion with her three children, as well as the months of practicing that it had taken to reach that point.

A sergeant E-5 with the Army National Guard, Laura headed off to training at Fort Bliss, Texas, a year ago, before then heading to Syria for an eight-month deployment.

During that time, Laura – who is originally from Iowa but now lives in Hawaii – kept dreaming of her reunion with her three kids: Grace, 13, Arnold, 6, and Abigail, 3.

Having watched a number of military reunion videos online, Laura said she noticed how they would all wrap up with a big, emotional hug.

And so, Laura decided to get practicing.

Roughly once a month, Laura would record a clip of herself squatting down the height of her children and giving them an imaginary hug.

Then, on September 25, the mom-of-three had the chance to do it for real, after she landed in Hawaii and headed to the kids’ favorite store, Spirit Halloween in Aiea, for the reunion surprise she had been planning.

Ahead of the moment, Laura said she was fighting back tears, before finally being able to walk towards her kids and hug them once more.

She later shared a video of the moment online, along with her months practicing hugs.

The video received an outpouring of positive messages from across the world.

Speaking of the reunion, Laura said: “The whole way home I had to fight back tears.

“I kept almost breaking down at the airport and on each flight then on the drive to Spirit.

“All that practice to find out my kids had grown so much while I was gone.

“I couldn’t squat all the way down because they were now so tall.

“It took a moment for them to realize it was me.

“Watching their eyes get really big when it clicked made all the tears roll.

“My youngest had trouble squeezing in, but I carried her around the whole store.”