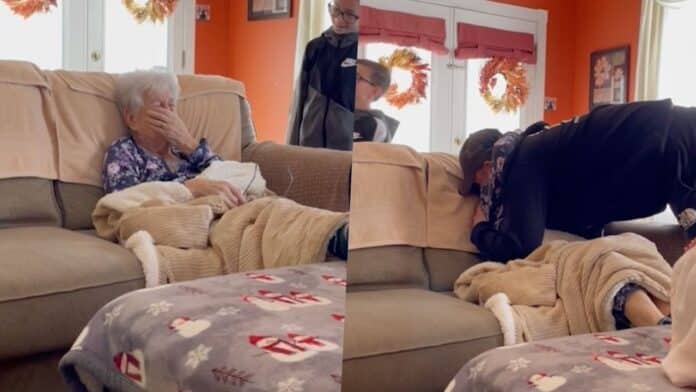 A beloved grandma in hospice care cried when she was surprised by her military grandson who she raised but never thought she would see again because of his deployment.

Margaret Poulson, 87, known as Peggy, has Stage 4 kidney failure, and her family said it is likely she only has weeks left to live.

Peggy’s grandson, Eric Poulson, 27, was raised by his grandma after his father died when he was aged two in a freak accident.

Eric’s brother, Bobby, also died in a tragic car accident five years ago, leaving Eric – whose mom has also passed – as Peggy’s only relation to her late son.

With Peggy’s condition spiraling, Eric, a member of the Philadelphia National Guard, did everything he could to return from his deployment in Saudi Arabia.

He had been expected to be gone for between nine and 12 months, leaving Peggy, the matriarch of the family, with little hope of seeing him again.

But after Eric was granted two weeks of leave, he decided her would return home to surprise his grandma.

On April 4, in Clayton, New Jersey, Eric entered the room with his nine-month-old daughter, Presley, and placed her down in front of his grandma.

Peggy, suddenly noticing that her grandson was also staring back at her, immediately began to cry happy tears.

Eric has since returned to active duty, where he is unable to record responses to questions because of the secrecy of his location, according to his family.

Speaking of Peggy’s surprise, Dana said: “Eric has had so much tragedy in his life and he is the strongest person I know.

“He joined the army to get on the right track after losing his mom, dad, and brother.

“Gram is so nice and kind she and Eric speak every single day on his way to work and she has always welcomed me into the family no matter what.

“She is so caring and funny and always there to talk or help with whatever we need.”