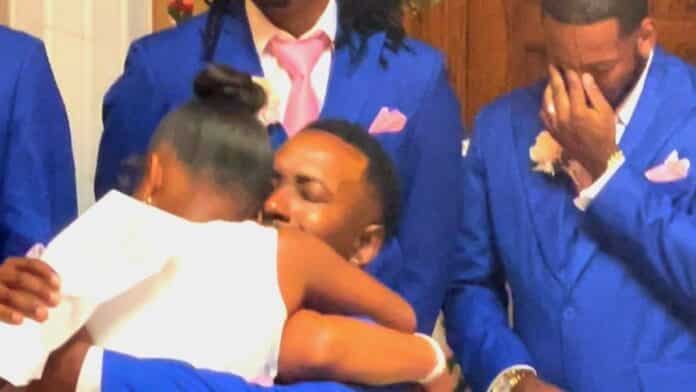 An emotional groom picked up not only a wife on his wedding day but also two new daughters – as he surprised them with an adoption request at the altar.

Through floods of happy tears, stepfather Dontez Williams, 33, from Detroit, Michigan, asked if he could make his stepdaughter’s Abigail, 9, and Natalie, 8, officially his own.

Dontez came up with the idea for the surprise – which took place on August 13 at the San Marino Club, in Tory, Michigan – earlier this year, while speaking to his now-wife, Myshella Burton, 26.

The pair were discussing how Dontez might adopt the girls, who have been in his life since they were ages one and two, and Dontez said that he had seen a number of videos on social media where family members had dropped adoption request surprises.

Thinking that his stepdaughters were still children and not adults, though, Dontez decided he should propose to them instead – and what better place to do it than at his own wedding?

After saying his vows to Myshella, Dontez then came forward with his additional request.

Watching the girls get emotional made him well up, too, Dontez said, and as his bond has grown with the pair down the years, Dontez now sees them as “Daddy’s girls,” as he says Yes to more requests than mom.

In the days after the wedding, Dontez shared a video of his proposal on Instagram, which received an outpouring of well wishes.

“When it comes to me being in their life, that is something they are very sensitive about, so their reaction was understandable in how it touched them the way it did.

“We didn’t rehearse it, so I knew why they were confused at first.

“But when my stepdaughters realized what was happening, they were all in and so tuned into my proposal that I felt like my proposal was something they had been waiting for all their life.

“I want people to understand that showing emotion is healthy, that fathers are needed in a child’s life, and that there are good men out there who will step up when the other parent is absent or being neglectful.

“I want people to know how important companionship and respect is, even to children.”