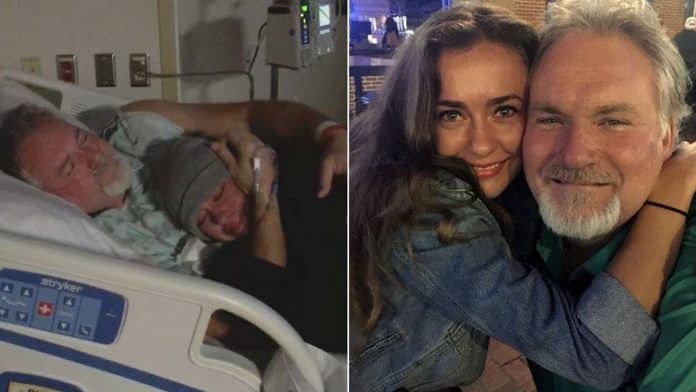 A hard-up college girl spent the last dollars to her name to travel 5000 miles and visit her dad in hospital – before people moved by her story online helped cover her flight home and rent.

Father Benjamin Bratton Jr., 57, immediately lit up as his daughter, Amanda, 24, appeared at his bedside in Anderson, South Carolina, on November 30.

Benjamin had developed a fever of 105 and severe pneumonia, and having heard how bad her father was feeling, Amanda was determined to do all she could to help him feel better.

Amanda admitted she was “short on cash,” but spent her last few dollars to catch a red-eye flight from Hawaii to Atlanta, and then an Uber to the hospital itself.

It was only minutes before she entered the hospital that Amanda let her mom know she was there, who proceeded to capture the loving reunion on video.

-Scroll down to see moving video below-

The joy on Benjamin’s face was clear for all to see, and the following day, hospital staff said he was already looking much better.

Amanda was also able to spend a few more days with her family, from Hartwell, Georgia – though she had only $100 to her name and still needed to pay to return to Hawaii and make her rent.

Having posted the video of her surprise online, people moved by her story asked if they could help and chipped in to cover her flight home as well as the next month’s rent.

Amanda, who lives in Maui, Hawaii, said: “My dad is a very strong man who is rarely sick and I was so upset that I was 5000 miles away in Maui.

“Both of my parents insisted that I didn’t need to come – however, two days in, when he wasn’t getting any better, I felt a sense of urgency that I needed to be there.

“The next day my mom and the doctor’s team all said that my dad looked so much better and that it must’ve been because I came.

“He was eager to get released and spend a few days with me before I left to go back to Maui.

“While he recovered, I was really worried about how I was going to pay to get back to Maui, as well as cover my rent.

“I had a hundred dollars to my name and I didn’t want my parents to have to give me money.

“Because I wanted to share our father-daughter heartwarming moment, I posted our video online.

“People were so supportive and asked if they could help me get back to Maui and with my rent – I shared my details and I had enough to buy my ticket home and pay my rent.”