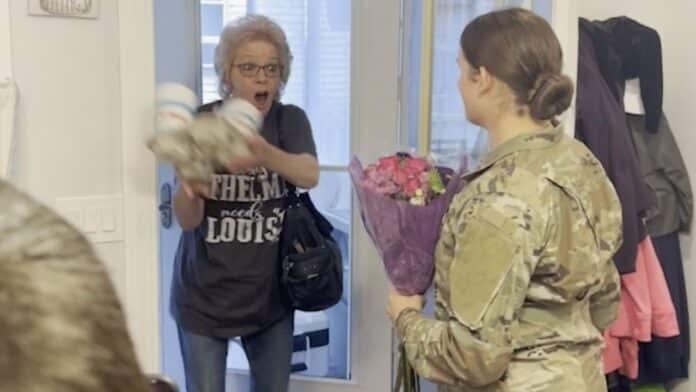 A stunned grandmother threw her soda drinks in shock when she opened the front door to discover her military granddaughter had returned from service after months away.

Kathy Elceser couldn’t believe her eyes as she walked through the doorway to discover granddaughter Lindsey, 18, waiting for her in military attire and holding a bouquet of flowers.

Lindsey is an E-3 with the U.S. Army, and as soon as her grandmother entered the room, she headed toward her for a long-overdue hug.

The 18-year-old had been away for six months, serving in North Carolina and Virginia, and the surprise took place on September 4 at Lindsey’s aunt’s house in Rock Island, Illinois.

The moment itself was planned by Lindsey’s sister, Jamie, who knew that family members were set to arrive at her aunt’s house for dinner, but thought her grandmother would not be expecting a special guest.

Jamie captured the moment on video – a clip that soon went viral on social media.

Lindsey said: “I was shocked, to say the least – but mostly I was just so excited to see her.

“My grandma and I are really close – we hang out a lot, some days I just come over unannounced if I see that her car is home.

“It was an overwhelming response, truthfully, I didn’t expect it to end up like it did.”