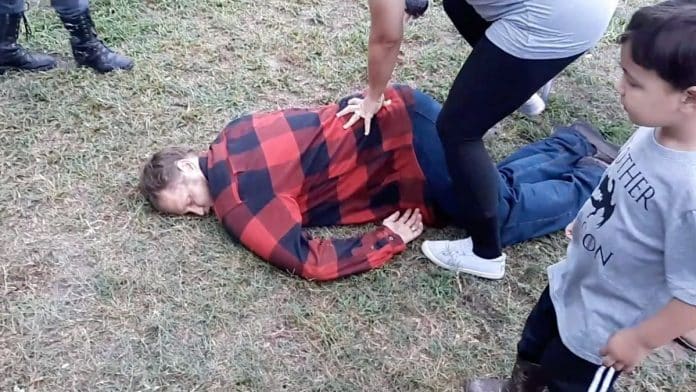 A Game of Thrones loving dad collapsed during a dragon egg gender reveal upon discovering he’s having another boy.

Marvin Holden was hoping for a little girl to join his three sons, but it was a case of the Brother of Dragons when Marvin and his family rubbed the color-changing dragon egg on May 2.

Joined by wife Amber and their sons Gavin, 10, Trevin, 8 and Drayvin, aged 3, the family rubbed the egg, which changes to either blue or pink when heated, revealing the gender of the child.

As the egg turned to blue outside their home in Texas, USA, one onlooker shouted, “Ooooh, another little boy!” before Marvin hit the deck.

A former navy corpsman and huge Game of Thrones fan, Marvin’s collapse was caused by a condition called cataplexy.

Cataplexy causes sudden muscle weakness and is impacted by emotional changes caused by the likes of laughter and surprise.

The surprise of the moment was enough to trigger Marvin’s cataplexy and cause him to collapse – something Amber’s cousin, Elvira, who purchased the egg, said she has done many times before to him.

According to Elvira, other medical issues for family members have meant that this was the first time the group had been together for such a reveal.

Elvira, who purchased the egg from Risen Son Creations, said: “Marvin loves Games of Thrones, so I found the egg on Amazon and had to have it for them.

“I worked with a local friend to make the kids and parents each a shirt.

“Marvin and the two oldest boys, Gavin and Trevin, were hoping for a girl, and Amber and youngest Drayvin were rooting for another boy

“I have a tendency to make Marvin pass out often.”

Marvin added: “My wife jokes I’m like the toys in Toy Story when they shout ‘Andy’s coming!’ and they suddenly hit the ground.

“Lots of people seem to be freaking out about it [the reaction], but family and friends that know me have been laughing about it.

“My family just doesn’t make girls – my grandfather had, like, six brothers.

“I was hopeful, but I think, honestly, if it was a little girl I would have been out longer.

“Since the beginning of Game of Thrones, I’ve been sucked in.

“A couple of weeks ago I went to Comic Con so that I could get the Night King’s autograph.”