Home Good News 90-Year-Old Stunned As She Meets Her 70-Year-Old Daughter For The Very First... 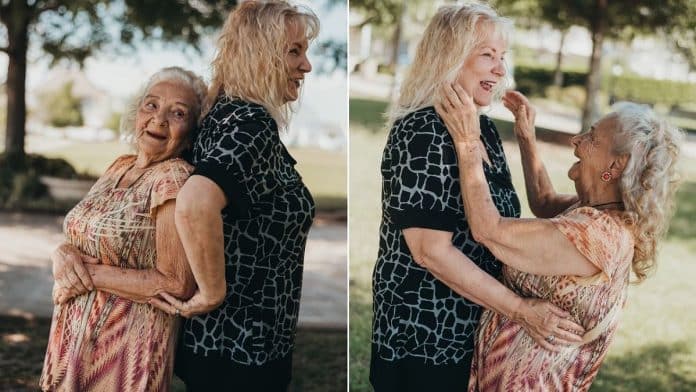 This is the emotional moment a 90-year-old was left stunned after coming face to face with her 70-year-old daughter for the very first time.

A story nearly three quarters of a century in the making, nonagenarian Elizabeth Pullen had never met her daughter, Lynne Wray, before the emotional encounter on May 6 – and couldn’t hide her delight when they first locked eyes.

In the tear-jerking video, Elizabeth can be seen screaming with excitement and her back to Lynne, who was ushered toward her biological mother while covering her eyes.

Then, in a moment of pure joy, both women turn around to embrace at Sugar Mill Pond in Youngsville, Louisiana.

It was actually Wanda, 36, who began to put the pieces together for this incredible reunion.

Having taking a DNA test last month, the photographer received a summary to say her closest DNA relative was someone she had never met: Lynne Wray.

After looking up Lynne, Wanda saw a note that said, ‘I was adopted and have never met my birth family.’

Wanda decided to speak to her mother Katherine and grandmother about the discovery, which was when Elizabeth opened up about putting a baby up for adoption 70 years ago.

A shocked Wanda put her grandmother and Lynne (Wanda’s biological aunt) in touch, arranging for them to meet for the very first time last week.

According to the photographer, adoption procedures in the 1940s meant that the mother was not allowed to even see the baby once it had been born, covering it straight after birth.

This meant the May 6 moment truly was the first time the pair had ever had any form of contact.

Wanda, of Wanda Gale Photography, said: “My grandmother was incredibly nervous and it was difficult for her to wait to turn around.

“I typically do first-looks for brides and grooms, and so I just thought this would be a really unique way for them to see each other for the first time.

“My grandmother said that she felt free.

“It was very exciting for me.

“My grandmother and I have always been very close, so for me to be the person who reunited them was special for me, my grandmother, and my aunt.”

“My grandmother isn’t in the best health and has often questioned why God has kept her on this earth – now she knows why.

“My grandmother’s message is that it’s never too late and not to be fearful of opening up.”

Since the meet, Lynne’s husband and son have headed to Louisiana from North Carolina, and Lynne’s adopted mum relayed her thanks to Elizabeth for allowing her daughter to be part of their lives.