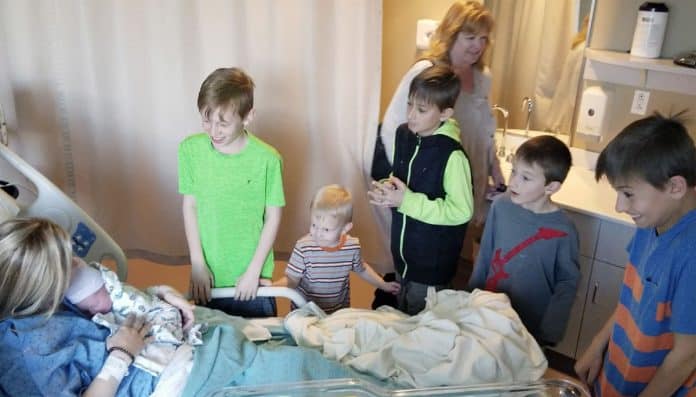 Five brothers anxiously meet their newborn sibling for the first time – just months after their pure elation at discovering they were getting the sister they dreamed of.

Filmed by mom Aubrey Taylor, Kel, aged seven, Tad, 10, Troy, three, and 11-year-old twins Rogan and Ross, stand anxiously waiting to find out whether they will become older brothers to a baby boy or girl.

The brothers are joined by their dad, Kimball, at home in Orem, Utah, USA, as they each hold cups containing colored powder – either blue for a boy or pink for a girl.

Suddenly they launch the powder into the air and can hardly contain their excitement as reality dawns on them – they are soon to have a baby sister.

After months of waiting, the brothers finally get to meet their new sister Shay, and edge into the room to meet her hardly able to contain their excitement.

Kimball, a physical therapist at FYZICAL Therapy and Balance Centers, told Happily: “When you already have five boys you kind of also wish for a girl.

“I don’t know what made the boys want a sister – maybe variety – but they had been praying for quite a while to have a little sister.”

“They were surprisingly quiet when they first met her. Perhaps they were being quiet so as to not disturb her, but there seemed to also be a bit of reverence for this beautiful little child.

“They were super excited to get a chance to hold her. Lots of “oooing” and “ahhing” – so far they are stellar big brothers.

“They are already planning the demise of anyone who doesn’t show her the utmost respect.”