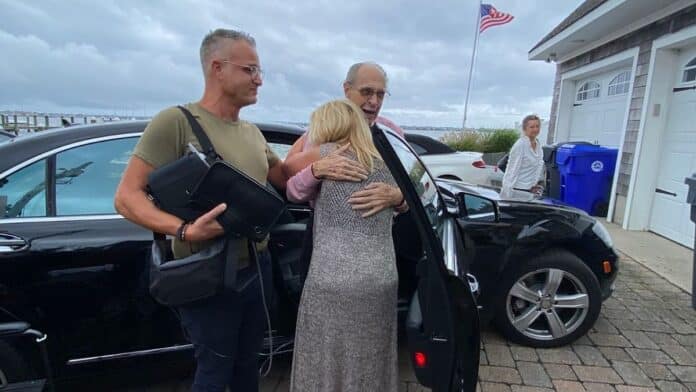 A father whose health is failing brought his daughter to tears when he surprised her at her dream home.

Harry Bussey, 89, from Atlantic Highlands, New Jersey, is currently in heart failure, and so his daughter, Danette, 59, never thought he would see her dream waterside house in Brick, New Jersey.

She had worked hard to buy the property while caring for her daughter but then came to believe he would never get to see after his health started to fail.

For years, hard-working Danette had spent large amounts of time caring for her own daughter, Olivia, 28, who has severe epilepsy and suffers from between 10 and 200 seizures a day.

During this time, Danette continued to hope that one day she would own her dream home – but when that time eventually came, in August 2021, the chances of Harry being there in person looked slim.

If Harry passed before being able to witness his daughter’s accomplishments, it would have broken Danette, her son, Davey, 26, said.

And so, on August 21, Davey and his boyfriend, Adam, arranged for a small, COVID-safe party at his mother’s new home.

During the festivities, Davey told his mom there was one more surprise waiting, and she was blindfolded in the doorway of her new home before being walked outside.

There, she removed her mask to witness her father getting out of a car, having made the roughly 45-minute journey thanks to safe arrangements that had been made.

Harry, wearing a nasal cannulas because of his condition, then headed towards his daughter, who cried happy tears as her father was able to witness her achievements.

Davey, who shared footage of the moment, said: “My heart was exploding!

“I want to give my mom the world, as she deserves every bit of happiness she can get.

“If her father ever passed before seeing her accomplishments, she would have crumbled.

“This has nothing to do with the money when I say accomplishments – this is strictly showing her dad how capable he raised her to be, as he is her inspiration in everything she does.

“The social media response was unbelievable.

“I never thought it would blow up the way it did.

“I don’t care about the clout or views, it was all about the comments — I was able to give people a little piece of the emotion that my family and I felt in that moment.

“I really think people related to this more than I would ever believe.”