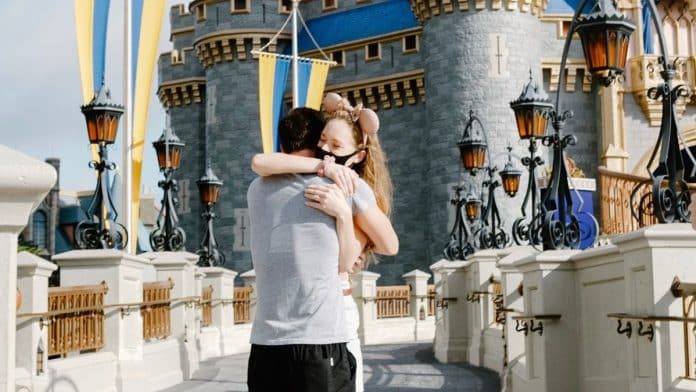 A Disney loving couple, who had been apart for eight months, reunited inside Disney’s Magic Kingdom – where they had got engaged.

Last year, Beth Johnsen, 27, from Newcastle, UK, had been all set to travel to America with her long-distance partner of eight years, Jeff Fugler, 29 – but the coronavirus had other plans.

Beth had applied for her visa in July 2019, and by February 2020, she started to say her goodbyes to London in preparation for the big move to the U.S.

That moment was set to be a cornerstone for Beth and Jeff’s relationship, too, as after meeting while working in the Disney theme park, Magic Kingdom, the couple faced the usual strains of a long-distance relationship over the following years.

Unable to easily live together in their native countries due to visa restrictions, Beth and Jeff quit their jobs and travelled together, also living in Australia for a period of time.

Knowing Beth was The One, Jeff then proposed to his now-fiancee in Disney, in 2017, and the couple decided to look into where they would make their permanent home.

Having decided upon the U.S. – and with Beth all set to leave the U.K. following a visa interview, the last step in the process – U.S. consulates suddenly began closing for months at a time, as COVID-19 spread.

As a result, Beth was unable to make an appointment at the U.S. Embassy in London.

She eventually had her visa interview in October 2020, and, having been approved, the 27-year-old then expected the process to take some time for her visa to be stamped into her passport and the document mailed back.

That was not the case, though, and due to the swift turnaround of a couple of weeks, Beth decided not to tell Jeff and booked a flight to surprise him inside Disney just five days later.

Having liaised with their friends in the U.S., Beth opted to surprise Jeff at a place that meant so much to the couple.

With a friend recording, Beth walked through Disney’s Magic Kingdom, where she then saw Jeff leaning on a set of railings.

Jeff, originally from New Orleans but now living in Orlando, immediately recognized his fiancée from afar, heading over to give her a huge hug.

The emotion of the moment the became too much for the American, who then began to cry in Beth’s arms.

Beth, speaking of the October 29 reunion, said: “I was nervous that he wouldn’t recognize me with my mask on!

“But I was so, so, so excited to finally see him again after eight months!

“I had all of the feels. I was mostly just insanely happy and on cloud nine.

“Things might be tough right now and seem like there is no end in sight. But there is hope.

“That first hug when you’re able to see your loved ones again will be the best hug you’ve ever had, and worth every second of waiting.”

Story courtesy of Find Us In Paradise / T&T Creative Media