Home Good News Devoted Grandpa Surprises Sister After Half A Decade Apart With Help From... 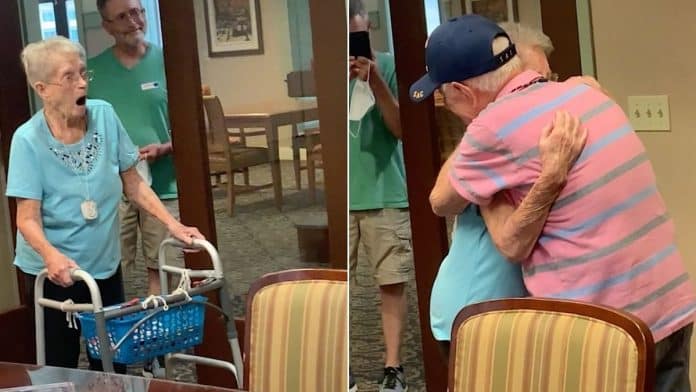 A beloved grandpa brought his sister to tears when he drove cross-country to surprise her after five years apart.

Mary Pine, 95, and Bob Taylor, 84, talk every day on the phone – but due to the pandemic and Mary being moved into an assisted living facility, they hadn’t met in person for roughly half a decade.

In fact, the pair has a history of surprises: the last time they were in each other’s company, Mary traveled to surprise Bob at his home, in Atlanta, Georgia.

But on July 4, for Mary’s birthday, Bob decided it was time for him to return the favor.

He called on the help of his granddaughters, Morgan Taylor, 27, and Kenzie Hardin, 24, who planned the journey to Mary’s care facility in Ambler, Pennsylvania.

With Kenzie living in Florida, flying as a group wasn’t an option, Morgan said – so Kenzie headed to Atlanta and they opted to drive.

Morgan said the journey took around 13 hours, with the group only stopping for bathroom breaks and gas.

Then, on July 4, Mary was called into a room at her care facility, none the wiser about what was ahead.

READ MORE LIKE THIS: Siblings Surprise Mom On Birthday By Paying Off Her Mortgage

With her family members recording, Mary entered, her jaw-dropping at the birthday surprise before she turned to the side to make eye contact with her loving brother.

The moment then became too much for the 95-year-old, who began to cry happy tears on Bob’s shoulder.

“I’m so happy he got the opportunity to see her again and her reaction was priceless.

“I know they were both overwhelmed with joy and love and that’s all I could ask for as a granddaughter.

“Hearing them reminisce on old times and tell stories like they happened yesterday was so heartwarming.

“I’m so thankful my family worked together to pull this amazing surprise off.

“It was so great seeing all of them.”