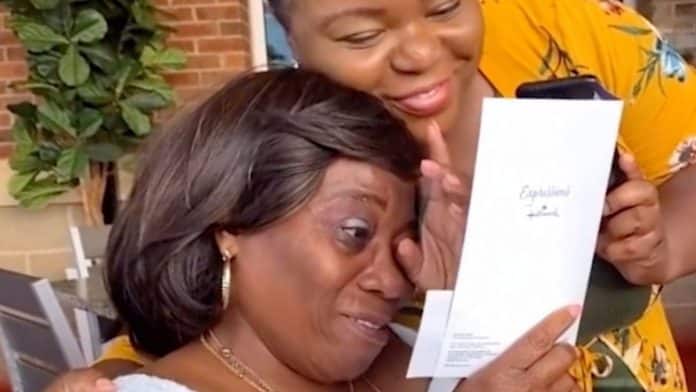 A group of grateful siblings brought their mother to tears on her 66th birthday when they surprised her by paying off the rest of her mortgage.

For years, June Hassan, from Atlanta, Georgia, would joke that all she wanted for her birthday was for her house to be paid off.

And so, with June approaching retirement, her daughter, Sheri Hassan, suggested to her adult siblings that they make the dream a reality.

On June 14, the family gathered at a restaurant to celebrate June’s birthday and exchange gifts.

READ MORE LIKE THIS: Couple Surprise Parents With Grandchild On Doorsteps Of Their Houses After 50 Days In NICU

June was then presented with a card from her children – Sheri, Jessica, Tony and Kemi – which she opened to discover a series of loving messages.

The mother then read out the messages aloud, eventually getting to the big news.

As the realization hit, the gesture brought Jean to tears, with Jessica and Tony capturing the moment on video.

Tony said: “I felt nervous she would find out about our surprise somehow because it’s really hard to surprise her, but we pulled it off.

“It was the most satisfying gift ever to see my mom overcome with happiness.

“I think a lot of people saw themselves in either us as her kids or in my mom as a parent who has worked hard all their life.

“I hope people see this and understand that if you all come together as a family, anything really is possible.”