Home Good News Dedicated Dad Who Never Missed a Game Holds Back Tears as His... 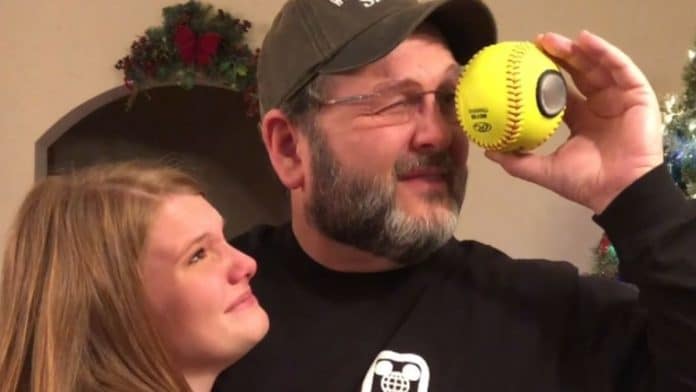 A dedicated dad who never missed a single one of his daughter’s games, matches, races or track meets struggled to hold back tears as he peered inside a surprise softball full of photographic memories.

For Amanda Gardner, 18, from East Texas, her father Gary, 53, was not only her biggest supporter, but also her coach.

Gary was the kind of selfless dad who would make it to every track meet, while he and his wife, Melissa, were up at 5am to cook breakfast for teams and set up tents on race days.

This kind of generosity did not go unnoticed between Amanda and her sister Kayla, 25, who has since left home to work as a Disney performer, in Orlando, Florida.

Kayla’s athletic career ended in 2020, too, as she headed off to college to focus on her studies. But the 18-year-old wanted to do something special to surprise her dad.

And so, having collected a selection of images from her childhood – at softball games, hugging her father courtside, and so on – Amanda began working on her unique thank you gift.

Having made a peephole in a hollowed-out softball, Amanda then added the images.

On December 26, 2020, the 18-year-old presented Gary with the gift, with Kayla capturing the moment on video.

RELATED: Girl Wrapped In Present Jumps Out To Surprise Dad After 3 Years Apart

The emotion of the moment got to Gary – something which is extremely rare, his family said.

As he held back tears, Gary pulled Amanda in for a warm embrace.

Kayla, who later shared the moment in the hope of spreading positivity, said: “Our parents have never missed a single game, match, meet, race, anything.

“They were there with a camera and camcorder in-hand, chasing us around everywhere.

“It was sometimes a thankless dedication they had, but my sister and I always recognized the love behind it and made sure they knew how much we appreciated it.

“Seeing my dad get emotional – which is rare – always makes me emotional.

“I wanted to jump into the hug and squeeze them both, but I held back so they could have their moment.

“You never know with posting anything like this how others will react.

“I post things to share moments in my life that are special to me, so I can have them forever.

“Apparently the world thought it was pretty special, too, with everyone flooding the comments with love.

“My message would be to really appreciate the extra steps your parents take to support you.

“Vocalize how much they mean to you and recognize the sacrifices that they’ve made through the years. Hold them close.”