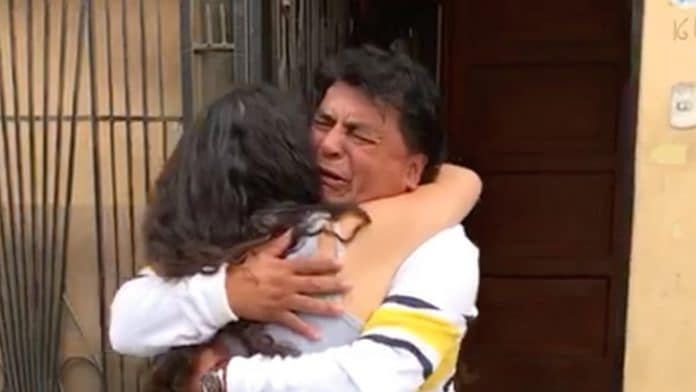 A beloved father let out a huge scream and burst into happy tears, as he opened a gift box to discover his daughter, who he had not seen in three years.

Approaching the box in his home town of Lima, Peru, Cesar Rodriguez Torres, 49, had no idea what to expect.

His daughter, Stephanie, 21, had moved to Florida to pursue higher education three years prior, and during that time she had not been able to return home to visit her family.

The time apart was tough, Stephanie said, but she kept hoping that one day she would be able to reunite with her father and mother, Rose, 44, in their homeland.

Having planned the surprise with her best friend, Leydi, who picked her up from the airport, Stephanie then asked that Leydi and her parents bring her to Cesar’s home in the wrapped box.

Inside the gift, Stephanie said she was shaking with excitement – while also hoping her father would not suffer some sort of heart attack or faint from the shock.

As he opened the gift and saw who was inside, Cesar screamed and shouted out, “What’s up, baby?! What is happening?!”

The 49-year-old then embraced his daughter and began to cry uncontrollably in her arms.

Leydi recorded the surprise, which took place on December 14, 2019, but it wasn’t until the following Christmas that the moment received viral attention.

Stephanie had previously shared the video on her private Instagram, but the following year she posted it to the more open TikTok, where she suddenly received an outpouring of views and likes.

Stephanie said: “The way I felt when I hugged and saw him was unexplainable.

“I was in shock and could not breathe, even though I knew about the surprise I felt as if I were going to be the one to have a heart attack.

“I have been living in Florida for four years and there is not a day that I do not miss my family.

“At the end of my three weeks with my parents [after the surprise], I was so sad and knew that I did not want to leave them again.

“However, they assured me that I have a better future where I live and to continue making them proud.

“My parents told me that one day we would all be together sharing my success.

“So I know that everything I do is not only for me but for them as well.”