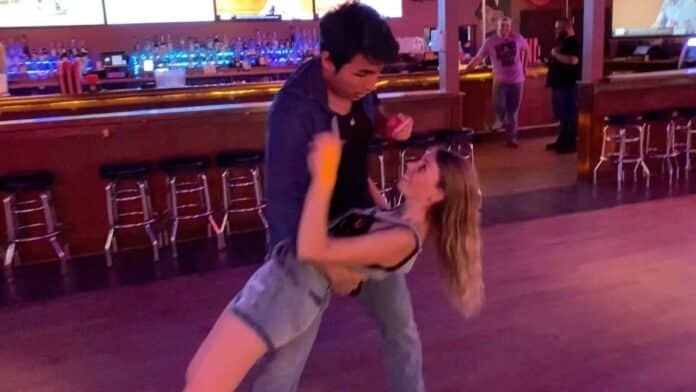 A country dancer came up with the perfect way to reveal her pregnancy news to her husband – by pulling out a positive test during the final dip in their performance.

Efisio Girodanelli froze in complete shock as his wife, Donielle, pulled out the test on the dance floor, initially asking “What is that?!” before the realization hit.

Four days earlier, Donielle, 34, had taken the test, but when Efisio, 31, had asked her the result, his wife had said it was negative – wanting to plan a bigger surprise for her husband.

They had been trying to start a family for two years and had seen a fertility doctor, with plans to start IVF treatment in November, but had never given up hope.

The pair share a love for country dance, and so Donielle spoke to The Maverick, a venue in Tuscon, Arizona, to ask if someone could record her grand reveal.

After a videographer dropped out, Donielle’s friend agreed to help, and the 34-year-old picked a song – “Wine, Beer, Whiskey” by Little Big Town – that Efosio would not find suspicious.

On August 6, the couple danced to one song before the track Donielle had selected started playing.

There was no routine and the dance was completely improvised, Donielle said – but because she had listened to the song more than 30 times, she knew the perfect time to pull out the surprise.

Donielle, who is expecting the couple’s child on April 6 2022, said: “I was extremely nervous – but as we danced, I calmed down and tried to enjoy the moment.

“I knew the song inside out because I had listened to it over 30 times, so I knew it was almost over.

“As he did the final dip, I knew this was it and I reached into my pocket, grabbed the test, almost dropped it I was so nervous, but then surprised him with it.

“I never lie or keep anything from him, so I knew he thought I wasn’t pregnant and it was a huge shock.

“I did not expect him to fall down on his knees and embrace me the way he did his reaction was everything.

“You can’t tell in the video, but I was crying with him as we stood there hugging each other.”