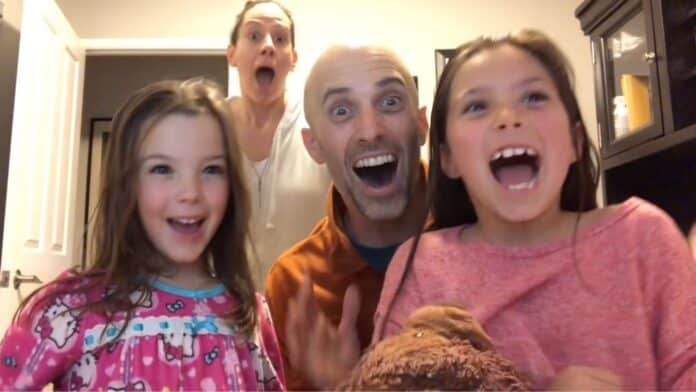 Parents who suffered infertility issues introduce their newly adopted baby to stunned family and friends in a series of incredible video calls.

Alexis DelChiaro VanHooser and husband Gabriel VanHooser got married aged 30 but when trying for a family, after two miscarriages, they were diagnosed with unexplained infertility.

Despite five rounds of Clomid, one IUI, three rounds of IVF and surgery, everything was unsuccessful.

When they decided to adopt just a week after meeting the birth mom, Alexis miraculously discovered she was pregnant – with the babies eventually born 5.5 months apart.

After adopting Grant as well as having miracle daughter Gianna, the couple still wanted one more child to complete their family and three years later, while still trying for more children, they were approached about adopting again.

They said ‘yes’ and were soon fostering newborn Francesca Jean while they waited for the adoption to become official.

Alexis and Gabriel were so happy to have another child yet upset they couldn’t share her with the world just yet, so decided to surprise family and friends via video call.

Throughout March and April 2020, the couple video called each family member and friend to surprise them with the news.

Alexis started each call by saying: “There’s someone I’d like you to meet” before lifting Francesca Jean to the camera.

Each video shows a different reaction from being completely speechless to screams of joy.

By recording their announcement, the family wanted to save a precious moment to eventually show Francesca Jean when she’s older.

In March 2021, Francesca Jean was officially adopted so the couple were later able to share the videos online where they received millions of views.

Alexis said: “I felt really disappointed I couldn’t share a precious new baby with family and friends because of COVID-19.

“I also wasn’t able to share her with my social media community so I wanted to do something special that would commemorate her addition to our family.

“It was a joy to see all of their reactions and have them captured so I can share them with Francesca someday.

“Frankie Jean has changed from a sleepy newborn to a curious 1-year-old with a huge appetite, infectious smile, and the most easy-going demeanor.”

Gabriel added: “It was so much fun to surprise our family and friends with Francesca.

“It was a bright spot during a tough time for many.”