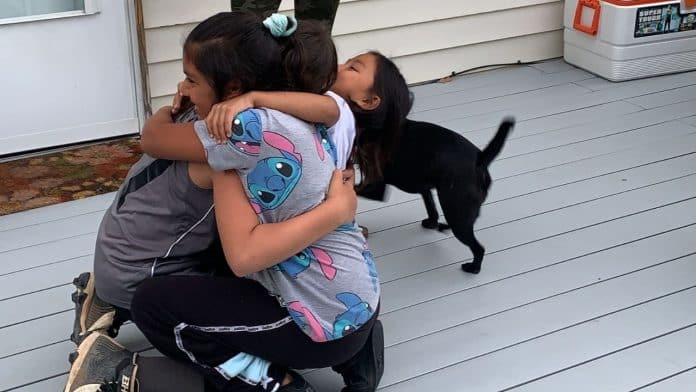 A 10-year-old girl who lives on the East Coast screamed and cried happy tears as she was given a surprise reunion with her West Coast siblings, who she had not been able to see for a year.

Kodi Gonzales lives in Pittsburg, Pennsylvania, during the school year, with her mom Frankie Gould, 35; her “bonus dad,” Justin; and her brother, Liam.

Each summer, Kodi then visits her dad, Sammy; her bonus mom, Tina; and her sisters, Lilli, 12, and Stassi, 7, at their home in California.

Last year, however, because of the pandemic, Kodi was forced to stay in Pittsburgh, and numerous surprise attempts by Sammy, Tina and Kodi’s siblings failed, as cases spiked and travel was halted.

As summer of 2021 approached, Kodi was expecting the usual discussions about potentially returning to California to visit the other half of her family, who she last saw on Memorial Day in 2020.

But her dad and siblings had other ideas – they decided to fly to Pittsburgh for a surprise reunion in Kodi’s yard that was one year in the making.

As Kodi walked around the corner of her house, she shouted to mom Frankie, “I knew it!”, as her father had been the one to pick her up from baseball practice as part of his own personal surprise.

But Kodi had no idea her sisters were there, too, and as she turned the corner and recognized two familiar faces, she began screaming and jumping up and down on the spot.

READ MORE: Boy Reunited With Dad In Hospital On Birthday After 55 Days

Almost hyperventilating in shock, the 10-year-old then ran into her siblings’ arms, where she could not hold back her tears of joy.

Frankie and Tina recorded the moment from different angles, capturing the incredible display of sibling love on show.

Frankie, speaking of the May 27 surprise at her West View home, said: “I was so surprised with her reaction.

“It melted and broke my heart at the same time.

“I could feel her pain of missing her Cali family in that moment.

“She was so happy she fell to her knees and could hardly breathe.

“I was in tears watching it unfold.

“Her sisters and Tina hugging her so tight was so heartwarming.”