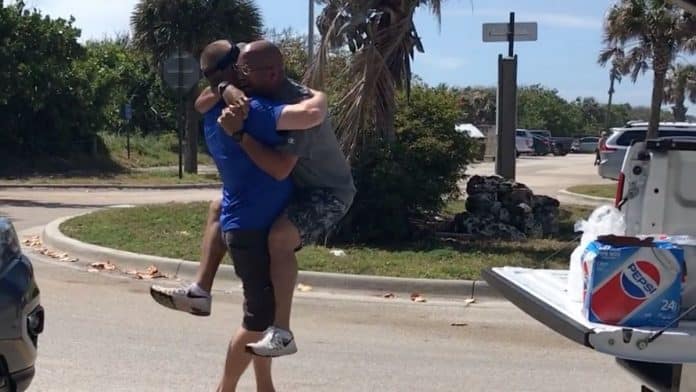 A military veteran was left screaming in shock when he was surprised with a heart-warming “brounion” by his best friend from his time overseas.

John Taylor immediately dropped the water he was holding and jumped the arms of Justin Crockett, who he had not seen in more than three years – a moment that later went viral on social media.

John, 53, a master sergeant combat medic with the U.S. Air Force, retired from active duty in 2008, before heading to Japan with his wife, Rachel, in 2012, as she was also in the Air Force at the time.

It was during this time that he met Justin, 39, a chief master sergeant and security forces manager, and the pair became good friends.

In 2015, however, John and Rachel were forced to head back to the U.S. because of health problems Rachel’s father was experiencing.

They then settled in Melbourne, Florida, where John discovered a love of teaching and began working towards a college degree.

For the next three years, John and Justin did not see each other.

READ MORE LIKE THIS: Mom Left Screaming In Restaurant After She’s Surprised By Military Son Back From 10 Months On Deployment

But on May 5, 2018, Rachel had planned her own retirement from the Air Force after 21 years, and John was set to graduate with a bachelor’s degree in Elementary Education from the University of Central Florida.

For years Justin had been hoping to visit his friend, and when he heard the news of the event, he decided to secretly fly into Florida from Hawaii.

With Rachel recording, Justin then sneaked up on his friend for the big surprise.

Though the moment took place in 2018, Rachel later uploaded the video to TikTok this year, soon seeing the post gain millions and millions of views.

READ MORE LIKE THIS: Military Dad Surprises Son During Nerf War After Deployment

Justin is now based at Holloman Air Force Base, New Mexico, and John works as a 6th grade teacher in Suntree Elementary School.

Rachel said: “With John, what you see is what you get.

“He is genuine, kindhearted and not afraid to display his true feelings.

“I knew that seeing Justin was going to fill his heart with complete joy.

“I knew he would be excited, but I didn’t expect such a wonderful display of pure love.

“It was so heartwarming to witness and I’m so thankful I was able to capture the moment.”