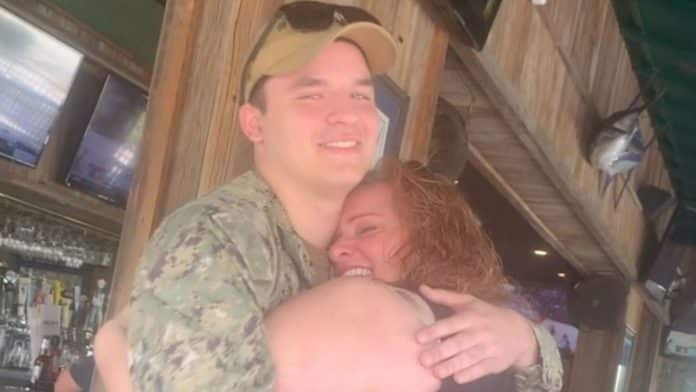 A single mom was left screaming in shock at her table in a restaurant as she was suddenly surprised by her military son who had been on deployment for more than 10 months.

Louise Ghigliotty’s son Jonathon, a 3rd Class Petty Officer with the US Navy, had been serving on the “Abraham Lincoln” Aircraft Carrier in the Persian Gulf.

After 290 days, though, Jonathon was given the news he was coming home – but Louise, 52, had no idea of a given date.

On February 15, 2020, Louise – who raised Jonathon and his brother alone since they were just three and five years old – was at a restaurant in Fort Myers, Florida, with her brother, Phil, who was in on the big surprise.

With Louise sat reading the menu, Jonathon walked into the room, asking if the seat next to Louise was taken – and as she looked to her right, realizing it was her son she let out a scream.

The loving mother then rose to her feet and covered her mouth in shock, before Jonathon came in to give her a warm embrace.

Though the footage was shot in February, Louise only recently shared it online.

RELATED: Parents Pulled Over By Police Stunned As Military Son Hops Out Of Cop Car To Surprise Them

She said: “I had no words, I was shocked, but I was also surprised with how I reacted.

as it’s American, it’s family, it’s pride and love and sacrifice of your child.

“People shouldn’t forget what these young adults give up to fight for our rights, it affects the entire family.

“Imagine the conversations that take place between parents and their child in making these decisions.”