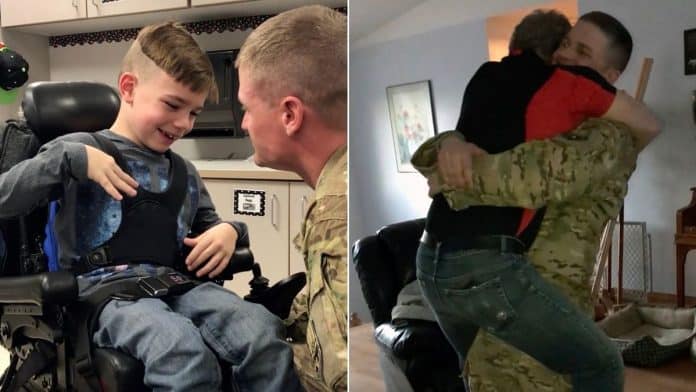 A US Air Force Sergeant returned home from deployment a week early – and surprised his family in a series of emotional greetings.

Sergeant Josh, 33, had been serving in the Middle East for seven months but began hatching the secret plan with his wife Sarah about a month before returning home to Colorado.

First, he surprises his eldest son, eight-year-old Jayden, who has Cerebral Palsy, at school with the pair both trying to hold back the tears as they embrace after so long apart.

Then, in another school surprise, Josh waits in a classroom for his two other kids, Kolby, aged five, and Rhilyn, aged three, who run into his arms as soon as they spot their dad.

One of the funniest reactions comes from his dad Kameron, who jumps in shock as Josh appears behind him before hilariously screaming ‘YES’ and leaping into Josh’s arms and asking ‘that’s awesome how did you do that?’.

In the heart-warming video, Josh also surprises his mom, two brothers, his cousin, cousin’s wife as well as his two dogs Ziegan and Willy – the pooches appearing almost giddy as he steps through the door.

He said: “My wife and I worked it out about a month before I found out I was coming back.

“We were originally just going to surprise my kids but we had so much fun we decided to surprise everyone else.

“My wife’s parents Steve and Sheryl offered to watch the kids the weekend I came home so I could spend the first day and a half back with just my wife.

“Being able to just spend time with her at first instead of splitting attention across everyone all at once made the transition back to normal life a lot easier.

“Her parents got the kids to school Monday morning and then we snuck in shortly after that to surprise them.

“It felt amazing – all of them. My kids were still my favorite and definitely the most emotional.

“My oldest son made me cry when he started tearing up, regardless of how hard I tried to hold it in, but each one was so fun because they were all unique and I didn’t know what to expect.”

Although throughout the video Josh is the star of the show, he admits it wouldn’t have been possible to pull off all the surprises without Sarah’s efforts.

He added: “She handled all the normal day to day stuff for seven months along with our three kids, including Jayden who has Cerebral Palsy and extensive therapy programs for it.

“She is an amazing woman and was the coordination master.

“I did have to continue using my Google Voice account and texting my family things like ‘should be home next week’ or ‘I really hope my flight doesn’t get delayed’ even though I was sending those from my house.

“After we surprised my mom, she helped figure out when my dad and brothers would be home by sending vague texts to them and relaying the information to me.

“For both my dad and my youngest brother, I hid in the basement and waited until they were upstairs and snuck up behind them.

“With my middle brother my mom sent him a message asking when he would be home so she could drop some stuff off.

“And for my cousin, his wife offered to cook my family dinner when I got back – under the impression it was still a week away – so I took advantage and asked what their schedule was like and if there was a specific day week to week that they were both home.

“They said Wednesday so we just showed up on Wednesday, a week before they were planning on cooking dinner.”

Josh and his family are currently raising money for his son’s Cerebral Palsy treatment and more information can be found here: https://www.gofundme.com/steps-for-Jayden

ORDER OF APPEARANCE IN VIDEO