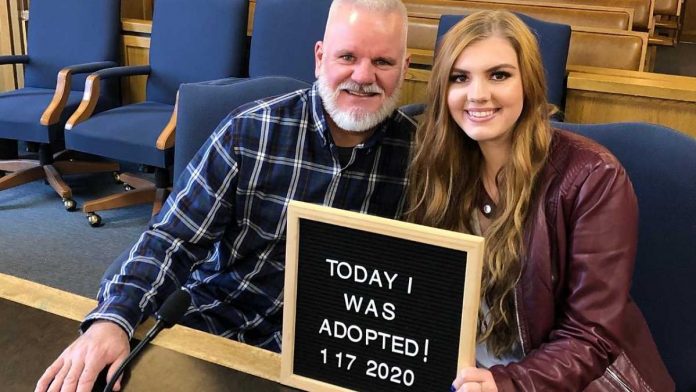 A loving teenager sent her stepfather on a scavenger hunt he’ll never forget – as he reached the end to discover he was being presented with adoption papers.

Natalie Roberts, 18, sent Raymond Roberts, 56, to all corners of their home in search of the final prize: a box wrapped in pink, which he opened to discover a number of pink balloons.

Deeper within the box, Raymond – celebrating his 56th birthday on December 27 – pulled out adoption papers and a t-shirt that said “DAD AF” as he began to realize what was unfolding.

Raymond came into Natalie’s life when she was seven years old, and from day one he immediately accepted her as his own.

On September 29, having turned 18, Natalie decided she wanted Raymond to legally become her father – but she opted to keep the decision quiet so that she could surprise her stepdad on his birthday.

Raymond’s scavenger hunt took him to the fridge, a bathroom mirror, the basement, behind the TV, and finally into the family’s living room for the big surprise.

The papers meant that Natalie would change her surname on her birth certificate and make Raymond her legal father, and the pair made the adoption official in January 2020.

READ MORE: Stepdad Thinks He’s On A Scavenger Hunt For A Birthday Present, But Breaks Down When He Discovers His Real Gift

After making it official, Natalie said: “We’ve had our ups and downs, as any relationship does, but as I grew up and we spent more time together, our bond grew stronger and he ultimately became my best friend and my role model.

“Once his birthday arrived, he had no clue what I was getting him, and his reaction to the surprise was the most heartwarming thing I’ve ever seen.

“He’s not a huge crier, but he definitely got teary-eyed and said “It’s the best birthday ever” and he got what he always wanted, which was for me to be his daughter.

“Although our relationship always felt like he was my biological father and I was his biological daughter, it was a great feeling for it to finally be official.

“I guess the message I hope people take from the video is how amazing and heartwarming a father’s relationship to his kids can be.

“I feel like dads today do not get enough credit for how hard they work, and I got pretty lucky with an amazing dad of my own.”