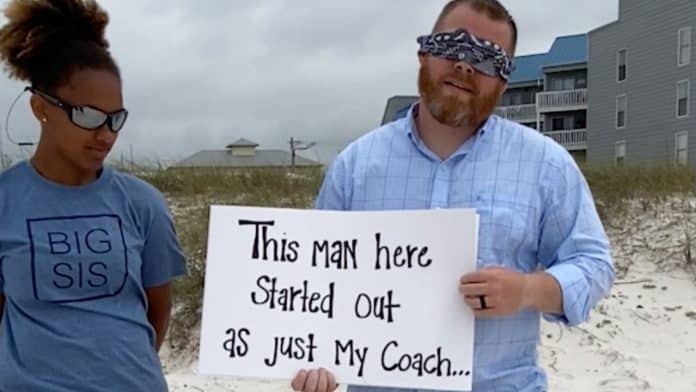 A teen gave her former sports coach and foster father a birthday surprise of a lifetime when he removed a blindfold and discovered a loving adoption request.

Daniel Donaldson, 36, coached Alecia [pron: uh-lee-C-uh], 14, in youth sports until 2019 and due to the small town they live in – Haleyville, Alabama – was aware of her foster experience.

He picked Alecia up for practice numerous times and over the years she became close to Daniel and his wife Tiffany’s three children Brody, aged 12, Samuel, 4, and Deacon, 1.

One night, while being taken back to her foster home ahead of a court appointment the next morning, Alecia asked if she could just live with Daniel and his family.

He and Tiffany had no hesitation saying yes, and after being given an initial four-month temporary custody period, Alecia eventually moved in permanently.

The family said they would always leave the decision up to Alecia about whether she would like to be legally adopted.

A few months before Daniel’s birthday, on May 2, she told Tiffany she would like to make that request official.

Tiffany helped devise the idea, telling Daniel that the family had a birthday photoshoot planned on a beach in Gulf Shores, Alabama.

With Daniel blindfolded, Alecia held up a series of signs, explaining the back story and why she would like Daniel to adopt her.

Then, as Daniel took off his blindfold, Alecia handed him a note, which he read before turning toward Alecia, Tiffany, and the children holding up signs reading: ‘Let’s make it official. Will you adopt me?’

An emotional Daniel then approached Alecia, giving her a huge hug, and appearing to cry happy tears on her shoulder.

Daniel said: “I really didn’t know what to do except hug her – I’m not sure that I really answered the question with words for a while.

“I really had no idea what in the world was about to happen.

“They always crack on me for being old, so I thought they were probably doing something to make fun of me being old.

“Tiffany and I were both always raised that if you have the means to help, you help.

“We believe the state of the world could greatly benefit from this mindset.

“There are children out there everywhere that need help or better yet a chance.”