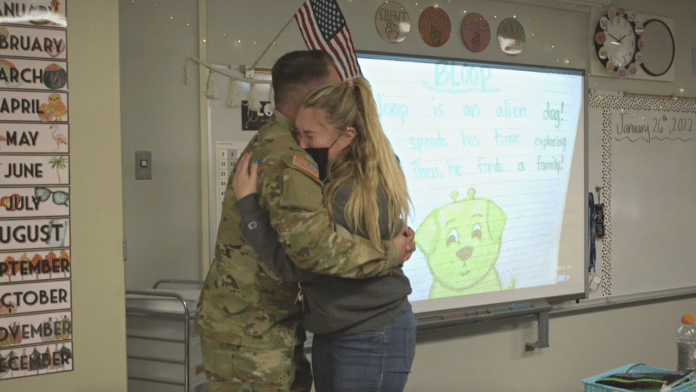 An elementary teacher burst into tears when her military brother interrupted her class having returned home early from deployment overseas.

Kali Vining, 25, had no idea her brother Chase, 24, who has been away for almost a year, was going to walk in that day.

She and her family initially expected him to return home two months later.

Chase, from Spokane, Washington, is currently serving with the artillery unit of the U.S. Army, and in February 2021 he was deployed to Eastern Europe for training and exercises with NATO forces.

He was originally scheduled to return home in March 2022, but after getting the news that he could return home in January, Chase called his dad Brian and his fiancee, Micah, to plan a surprise for Kali and his mom.

Mom Jollene accidentally found out, though, so the family worked on a way to make the surprise for Kali extra special.

Jollene is a principal in the same school district where Kali teaches, so she contacted the principal at Kali’s school, Audubon Elementary, to ask for permission to surprise her daughter.

What made the surprise even more difficult was the fact that Michah is Kali’s roommate – but on January 26, Chase, accompanied by the school district’s media personnel, arrived at the school for his big surprise.

Speaking of the moment, Kali said: “It’s hard to explain the rolling feelings that happened when I saw him.

“The very first thing I saw was the cameraman swoop into the classroom and I thought, ‘What the heck!’, and then, seconds later, I saw my brother and I think it took a second for my brain to understand what was actually taking place.

“I was flooded in that moment with so many emotions: excitement, happiness, disbelief, and also relief.

“It’s funny, too, because that morning I had tried to call him because I’d been feeling more anxious than usual about him being overseas – I had no idea he was actually in Washington on his way home at that time.