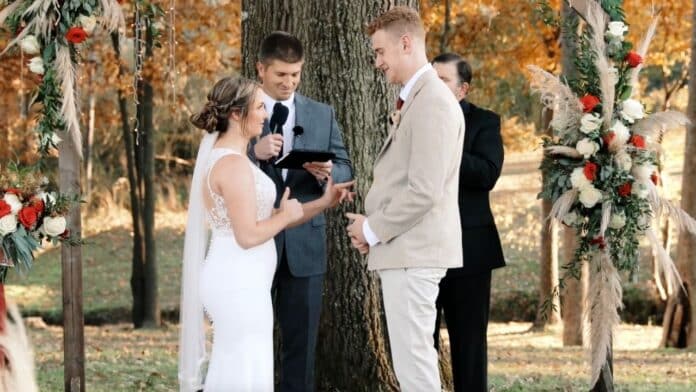 A doting bride brought her groom to tears on the altar as she suddenly started performing her vows in sign language – a surprise gesture for him and his deaf parents.

Kelsey Kulick, 23, secretly learned the vows as a show of love for her husband, Michael, who communicates with his parents through American Sign Language (ASL).

The moment took place on November 13, at the Gore Creek Wedding Venue in Boaz, Alabama, near where the couple lives.

According to Kelsey, she had mentioned when she and Michael first got engaged that she would like to sign her vows.

Kelsey was worried about potentially signing something wrong and offending someone, but Michael said his parents would love the idea.

After that first chat, though, Kelsey decided not to mention the idea again, so that Michael would forget about the suggestion by their wedding day 11 months later.

She opted against trying to learn signs from the internet in case they were wrong – instead contacting Michael’s aunt, Christy, whose husband is also deaf, to ask if she could record a video of the hand actions.

Using Christy’s video, Kelsey secretly learned to sign her vows, and, come the wedding day, only Christy, videographer Chandler Smith, and pastor Harvey knew what was to come.

Kelsey said that when she returned from her honeymoon the post had more than seven million views, and, to date, it has received more than two million likes.

She added: “This was important to me because this is their family’s way of communicating.

“Though I’m not fluent, I wanted to do it out of respect for them and to show them all that I love them and I’m so thankful that I get to be a part of their family.

“I was very nervous going into the vows portion of the ceremony because I wanted it to be perfect.

“But I had practiced so much and had even practiced multiple times only seconds before walking down the aisle.

“Once I began signing, it all just came naturally. Then seeing Michael’s reaction just made the moment even more special than I had ever imagined.

“Michael says he was very emotional and that it was a very special moment for him.

“I did get to ask my in-laws and they were happy about it. They still talk about how they loved that moment and they’re thankful that I made an effort.”