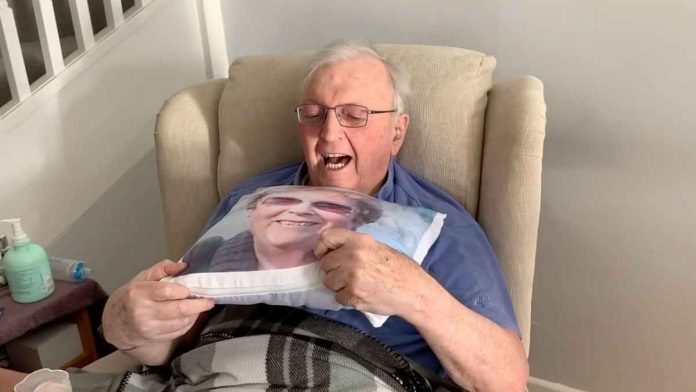 When Robert Archer’s childhood sweetheart Angela passed away after 60 years of marriage he was inconsolable.

Angela cared for her husband, now aged 82, ever since he was diagnosed with dementia.

But after she passed away in 2016 aged 75, Robert mourned her loss continually.

As Robert’s memory faded due to the dementia, his family realized they needed to help him better remember Angela.

Robert’s daughter Rachel and her own daughter Ellenor hit upon the idea of a memory pillow.

Sourcing a plump pillow from a local shop, they had a picture of Angela printed on the front, so Robert would never be far from his sweetheart.

As they surprised Robert with his new memory pillow, Rachel began feeling butterflies in her stomach.

“I was looking forward to it but also emotional – Ellenor was shaking with nerves to see her granddad’s reaction,” Rachel said.

As Ellenor, 13, handed Robert his new pillow at his care home in Swindon, UK, Robert burst into a giant ear-to-ear smile.

Instantly recognizing his late wife, he wrapped his arms around the pillow and squeezed it tightly.

“I was overwhelmed and happy with how he reacted, he’s slept with mum every night since,” Rachel said.

“It’s the small things that count”

Since the surprise Robert has refused to let the memory pillow out of his sight, tightly gripping it each night as he nods off.

“Ellenor was very emotional and happy to see her grandad happy as she absolutely adores him,” Rachel added.

“I hope people will cherish their loved ones, as it’s the small things that count.

“We didn’t do it to attract attention but to spread awareness, especially during the lockdown.”

Since uploading the video online, Rachel and her family have received an outpouring of love from people around the world, including others who now intend to surprise their own loved ones with similar memory pillows.