Home Good News Undocumented Son Who Returned Home To Get Visa But Had To Wait... 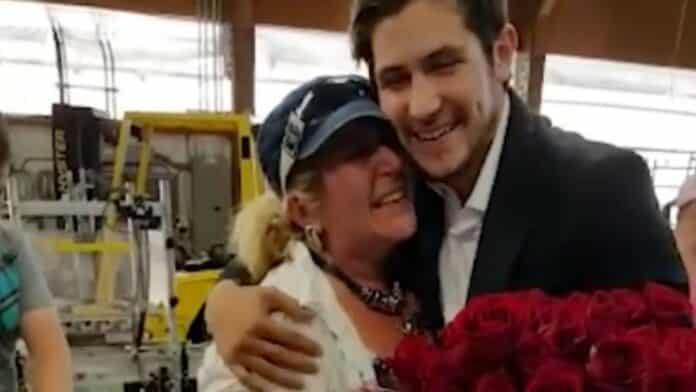 A man who had been separated from his mom for six years while he aimed to secure a visa surprised her with a dozen roses for every year they were apart.

When Kevin was 17 he discovered he was undocumented, meaning he could not get a job, go to school or get a driver’s license in the United States.

As a result, he moved from his family home in Oregon to live with family in his native Mexico, where he was born and later taken to the U.S. with his mom, Elizabeth.

Kevin thought the process would be swift, but he received multiple visa denials while living back home with his grandma.

Eventually, Kevin got a job working for the Governor of Jalisco, who signed a letter to the English consulate so that he could obtain a student visa.

Kevin wanted to make up for lost time.

He called his mom but again told her that his visa had been denied, as he had a plan in mind.

Secretly, he liaised with his brother, Samy, who picked him up from an Oregon airport and took him to his mom’s place of work, a greenhouse in Oregon.

READ MORE: Great Grandfather With Dementia Reunited With Great Granddaughter Who Helped Care For Him

There, Kevin walked through carrying a dozen roses – one dozen for every year they had been apart – and made his way to his mom, who was in a warehouse around the back.

As Kevin walked past his mom’s colleagues, they immediately recognized him and what was about to happen.

When he reached his mom, Kevin gave her a long-awaited hug and presented her with the flowers, causing Elizabeth to cry with joy.

Kevin has a history of emotional reunions: in 2021, he was surprised by his biological father, who he had tracked down on 23andMe.