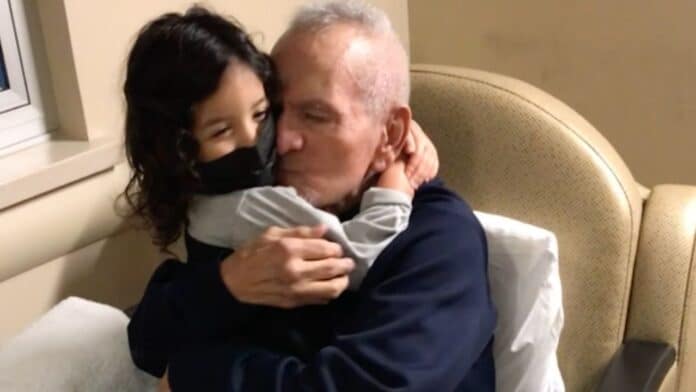 A great-grandfather with dementia is emotionally reunited with his great-granddaughter who missed him being around after he had to move into a full-time care facility.

Jesse Bocanegra – better known as PawPaw to his family – was diagnosed with dementia in February 2019.

Since then daughter Gina has been his full-time carer as his cognitive skills have been affected – but one person Jesse asks about constantly is his three-year-old great-granddaughter Aleida.

Jesse had been living with Gina, granddaughter Ava and great-granddaughter Aleida in Houston, Texas, up until two months ago when he was moved to a nursing facility.

READ MORE: Woman Repeatedly Records Herself Telling Grandmother With Dementia That She’s Engaged, As She Knows How Much Joy It Brings

Aleida was used to having her PawPaw around every day so it was a huge change for her.

She had been aware of him needing help since she was just a year old and tries to help him whenever and wherever she can.

On October 1, Aleida’s family drove to pick her up from school and when Gina opened the car door Jesse was sitting inside waiting to reunite with her.

Aleida jumped into the car and onto Jesse’s lap for a big cuddle as he told her how much he had missed her.

Just over a week later, on October 17, Gina and Ava planned to visit Jesse in hospital.

Jesse had been in hospital for a week after receiving a procedure and due to COVID-19, restrictions were in place so that children were initially not allowed to visit.

Unexpectedly however, the family learned that day the rules had been changed so Aleida would be allowed to see him, so they jumped at the opportunity.

As soon as Aleida walked in Jesse threw his arms in the air in happiness and she ran towards him for a hug as he told her how much he missed her and gave her lots of cuddles.

Gina said: “Having a front seat to this disease stealing so much from my father has been such a heart-breaking and weary experience for him and us.

“Dealing with dementia is so incredibly tough as it is so much more than just memory loss.

“Aleida is my dad’s pride and joy, his sunshine, the highlight of his life.

“I never had a grandfather, so their relationship is so heart-warming to witness.

“We plan to one day bring him back home with 24/7 care when we can afford it.”

The family have started a GoFundMe to try and look after Jesse at home to find out more check out this link: https://www.gofundme.com/f/help-jesse-and-family-keep-their-home?qid=44bd609da95d8178aa29ed64d205f692