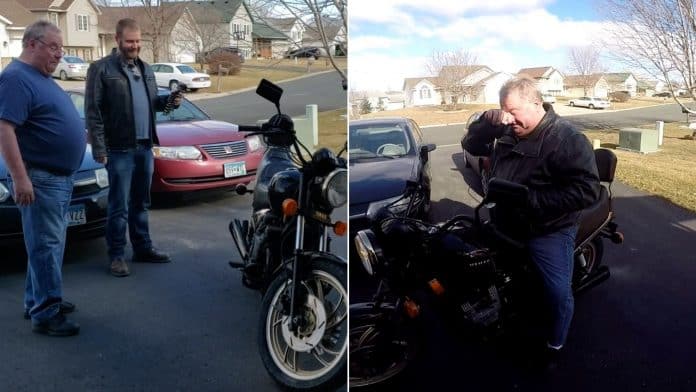 A son ‘stole’ his father’s beloved motorcycle from under his nose and secretly fixed it up – before surprising his dad in an emotional moment caught on video.

The 1983 Yamaha Midnight Maxim was Jim Tarpey Snr’s pride and joy, bought when he was in his 20s.

Jim had ridden the bike when first dating his now wife, Linda, taking her on excursions to the Golden Gate bridge in San Francisco.

But as time went by, and family life got in the way, the Yamaha ended up sat rusting under tarpaulin at the family home in Rockford, Minnesota.

Tucked away in the corner of a garage, behind lawnmowers and other garden tools, the bike was no longer able to run – and hadn’t been used in over two decades.

But Jim’s son, also called Jimmy, a self-confessed motorcycle enthusiast and a hobby he inherited from his father, embarked upon an elaborate project to restore the Yamaha without his father knowing.

After crowdfunding online to raise enough cash to cover the necessary repairs, new parts and labour required to get it back on the road, Jimmy set in motion a plan to ‘steal’ the bike from under his father’s nose with the help of family and friends.

Jimmy waited until his father was out of the house before entering the unlocked garage and loading the motorcycle onto a truck.

He then used a series of tapped up boxes to mimic the shape and size of the Yamaha, before throwing the cover back over the top in a bid to fool his father into not realizing it had gone.

The bike was then whisked away to a repair shop in Loretta, Minnesota.

There the team of mechanics set about fixing the ageing motorcycle, including giving it new tires, battery, spark plugs, carburettor’s, a complete oil change, installing a new fuel line and of course a wash and wax of the leather.

“The bike is very special to my dad as he purchased it when he was in his early 20s. He took my mother for rides on the bike in the 80s around San Francisco back in the day when they had just started dating. They would go across the Golden Gate and Bay bridges.

“As his interest in motorcycles waned during my childhood in the 90s, the Maxim ended up sitting neglected.

“In the 20-Teens, I grew up to fill his shoes, so to speak, and I became a biker myself at the same age he was when he had first purchased the Maxim.

“But for roughly two decades, the Maxim occupied garage after garage collecting dust, aging and watching the world pass by. Restoring it became one of those dad projects that is talked about but never ends up happening.

“So after four seasons on two wheels myself, I decided to take the restoration of the bike into my own hands.”

After successfully sneaking the motorcycle out and having it repaired, the only thing left was for Jimmy to surprise his dad with the gleaming, good-as-new Yamaha Maxim.

Filming the moment he calls his dad with the bike parked just out of sight and asks him to come outside to help lift something heavy out of his car.

Jimmy’s dad can be seen opening the garage door and muttering, “You’re pulling something on me?”

But despite figuring something fishy was afoot, he hadn’t realized exactly what was waiting for him on the driveway as the garage doors slowly opened.

As Jimmy Snr walks out, he instantly spots the motorcycle and blurts in disbelief, “That’s my bike!”.

Lost for words and tearing up as he inspects the gleaming Maxim, he hugs Jimmy – before firing it up for the first time in decades and taking it for a ride.