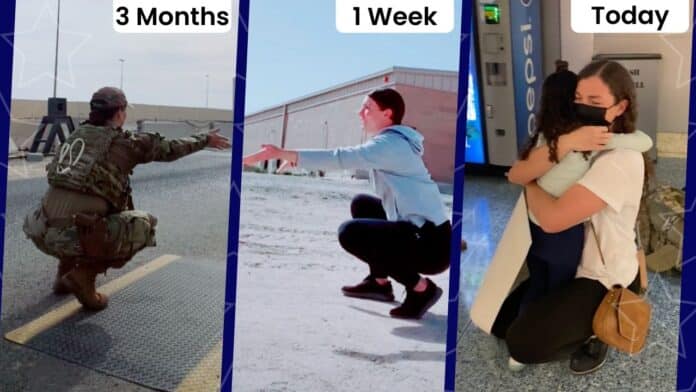 A single military mom has shared an emotional video of her practicing her reunion hug with her daughter while on deployment before finally reuniting after seven months apart.

In each clip, Danielle Metzger, 31, is seen squatting down to the height of her five-year-old daughter Rylee, before hugging the air in place of what would have been the youngster.

Throughout her deployment, Danielle kept the videos on her phone, storing them in a draft with the eventual hope of adding the reunion video as the final piece of the puzzle.

She was recently deployed to Kuwait for a total of six months, which also involved completing a further month of training and COVID-19 protocols.

During her time overseas Danielle was missing Rylee, and so she came up with the creative idea of recording her would-be hugs.

Though Danielle is a single mom, Rylee’s dad – who serves in the U.S. Air Force – cared for his daughter in Arizona while her mom was on deployment.

On February 5, as Danielle returned home, she recorded the final parts of her hug video – including selfies of the final hours as she headed back to Rylee, tears filling her eyes.

When she was finally met by her daughter at Harry Reid International Airport in Las Vegas, that moment, too, was captured on video, which Danielle made the final clip in her montage.

Danielle said: “I wasn’t sure how she was going to react seeing me in person again.

“When I finally saw her, it was the best feeling ever – the tears came out fast and she seemed happy to see me.

“It took me a minute to recognize that she was actually standing in front of me and I was holding her again, I didn’t want to let her go.

“The next morning, I finished the video and let her see it. She was sad at first seeing it because we were away for a while and I was crying while hugging her.

“She asked why I was crying and I explained that it was very happy tears being able to see and hold her again.

“Now, she just says that she’s happy to be with mommy again and she missed me and loves me.

“I think I got up to the video having almost one million views by the first day of posting it.

“There were mostly positive comments, with people saying it made them cry or thanking me for my service.”