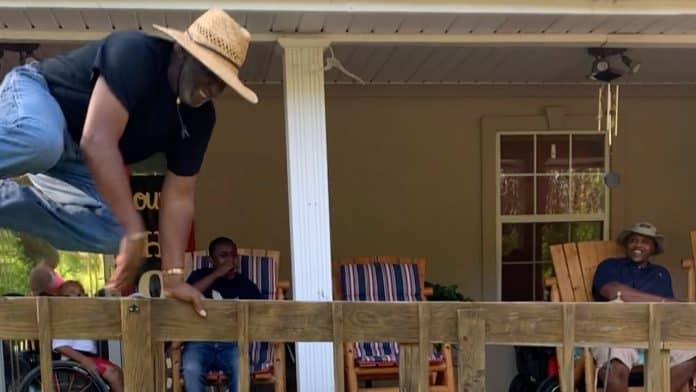 A 70-year-old dad leaps over a porch fence like it was nothing and heads straight into the arms of his military son who surprised him with a birthday visit after two years apart.

Charles Huddleston showed athleticism younger than his years as he emotionally reunited with his son, Jarius Huddleston, 21, in Decatur-Conehatta, Mississippi.

Jarius and his father are extremely close, talking over the phone every day since Jarius headed off with the U.S. Army roughly two years ago.

The 21-year-old is currently based in Fort Lewis, Washington, and due to life circumstances and the pandemic he had not been able to visit his parents for some time.

But on June 20, Jarius planned a visit to see Charles, as he wanted to do something special for his father’s 70th birthday and Father’s Day.

After surprising his dad, Jarius then reunited with his other family members, most of whom also knew nothing about his visit.

Jarius’ sister, Pam, just so happened to capture the surprise on video, and his wife Jo An later shared the clip online where it quickly went viral.

Many of the comments, Jo An said, showed appreciation for Charles’ acrobatic jump.

Charles’ dream for his 70th birthday was to have someone to go fishing with and following Jarius’s surprise the father and son duo headed out and caught three fish.

Jo An said: “I cried and cried with joy – I know how much they miss each other and how much my husband longs to be home with his family.

“I was also surprised when his dad jumped over the porch out of excitement and got a lot of comments on my post about him being 70 and jumping like he is 17.

“The bond that Jarius and his father have and the love that they have for each other is infectious and it radiates to other people when they see it.

“Military families live like he deploys tomorrow, and we always try to see the positive and the beauty of things.”