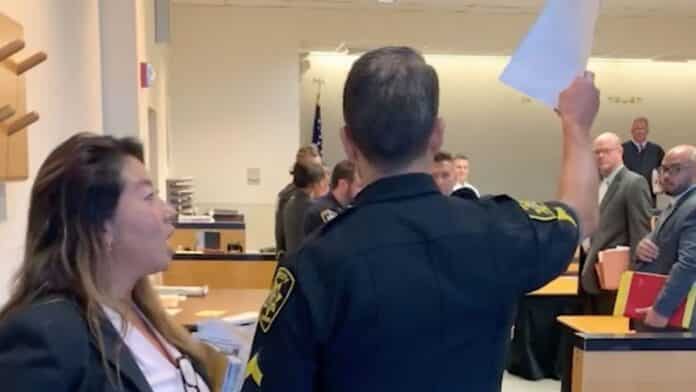 A sheriff’s deputy came up with a unique way to propose to his wife, who is a member of staff at their local District Attorney’s office – by “filing” a writ of his proposal and heading into the courtroom to raise it before getting down on one knee.

Anni Oh, 49, from Suffolk County, New York, had no idea what was coming when she headed to court as part of a dangerous inmate case.

Little did she know her boyfriend, Michael Davis, 46, a sheriff’s deputy with the Suffolk County Sheriff’s Office, was waiting outside, having planned his grand proposal with courtroom staff.

In the buildup to the big question, Michael had contacted a friend of Anni’s at the courthouse, who, in turn, asked Honorable William Condon, a Supreme Court Justice for the State of New York, for permission to propose in the building.

Judge Condon had given Mike his blessing, and so the deputy then needed a date to head into the building on the same day as Anni.

Anni has been with the DA’s office for more than 20 years, and she was assigned to Justice Condon’s court for several years as a Major Crime Bureau Assistant.

When she was transferred to Enhanced Prosecution Bureau, she kept a few of her own cases – one of which required her to be in court.

That day, Mike waited outside the courtroom with a writ, which he had printed out and put on the necessary blue-backed paper.

The writ pleaded for Mike’s permission for Anni’s hand in marriage, and having walked into the courtroom, much to Anni’s surprise, Mike then presented the papers to the judge and got down on one knee to propose.

An emotional Anni said yes before tearfully heading into Mike’s arms for a loving embrace, while the judge said, “Application granted.”

READ MORE: Probation Officer Left Speechless As Boyfriend Led Into Courtroom In Shackles… But It’s Not What She Thinks

The date of Mike’s proposal, September 11, was a significant one for him, too: Mike was a police officer with the NYPD on the days that the Twin Towers fell and, for several weeks after the attack, he was assigned to the World Trade Center site.

Mike said he was initially hesitant about proposing on that date in 2019, but Anni was not scheduled to be in court for five more weeks after that date, and he couldn’t wait.

The couple initially kept their video of the moment private, but in 2021, right before the 20th anniversary of the towers falling, Anni decided to post the video on TikTok to share the positive moment.

The post itself soon went viral, and Mike and Anni plan to host a celebration in September 2022.

Mike said: “Anni never imagined the response we have received.

“It turns out her TikTok did exactly what she wanted to do: it made people smile and shed off some of the negativity of the world around us.

“We just never imagined the scope of the reception.

“Although I was initially hesitant about proposing on September 11 because of the tragedies that occurred on that day, I am now glad I did.

“My fiancé believes it was the perfect day to propose to her.

“She is a firm believer that us moving forward and living our lives to the fullest is the best way to counteract the terror and the hate that occurred that day.

“I got down on one knee and said, ‘Will you make me the happiest man alive? Will you be my wife?.’

“‘Oh my God,’ she replied, ‘We could buy a house with that thing,’ as she started to cry.

“It was that moment that I realized that things had gone perfectly, better than I had imagined.”