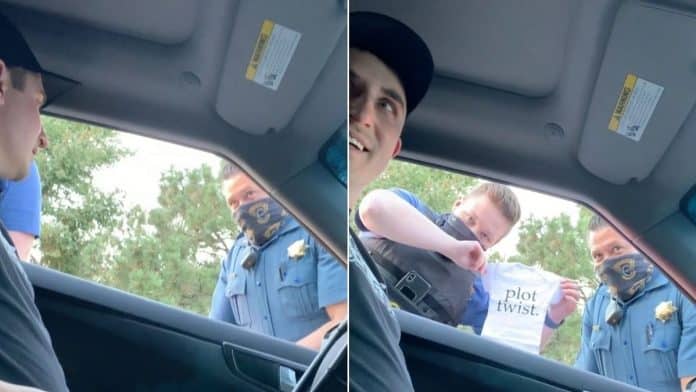 A police officer’s shock suddenly turned to delight when he was pulled over for what he thought was a routine traffic stop – only to be surprised with a grand pregnancy reveal.

As Mike Sawyer, 36, calmly chatted to the two Colorado State Patrol troopers who had pulled him over, wife Sam, who was sitting in the passenger’s seat, began secretly recording.

Sam had been in on the surprise all along, having spoken to a friend – one of the troopers – to brainstorm ideas as to how she could share the news with Mike.

Trooper Vincent Moscardino chatted with Mike on November 5, when he explained that the vehicle had been pulled over because of expired tags.

Mike, none the wiser to the surprise that was about to come, said that the car belonged to Sam, 34, who had their papers on hand and continued to go along with the charade.

After Mike had handed over the papers, Trooper Moscardino said, “I know I stopped you for the tags, but just now I noticed you don’t have a properly restrained child back there.”

Trooper Brittani Fah, who was also recording the moment from outside the car, then held up a baby grow that read, “Plot Twist.”

READ MORE: Man Who Couldn’t Wait to Be a Dad So He Could “Rock A Fanny Pack” Surprised With One for Pregnancy Announcement

Mike, in complete shock, let out a “Shut up!” in surprise before turning to kiss his wife.

The moment took place in Lakewood, Colorado, and Sam later shared the footage online so others could share in her husband’s delight.

Sam, who is also part of the Colorado State Troopers’ team, said: “We made sure we had permission from Brittani’s sergeant to go forward with the idea.

“Once we had the all clear, I bought the ‘Plot Twist’ onesie and got it to the trooper holding it.

“I also decided that I would get Mike out of the house to go to the grocery store, under the ruse that I wasn’t feeling well and wanted soup.

“The troopers were given the location of the grocery store so they could be nearby and wait for us to head home.

“I was messaging Brittani updates the whole time so they could be ready.

“I was so very happy.

“Mike had been wanting another baby, but this one was a surprise to us – he had no idea it was coming.

“I hope people will see the human side of law enforcement with this.

“We are a family, both as a blue family and a blood family.

“We love to care for each other, and it’s that kind of attitude of service that draws us all to this kind of profession.”