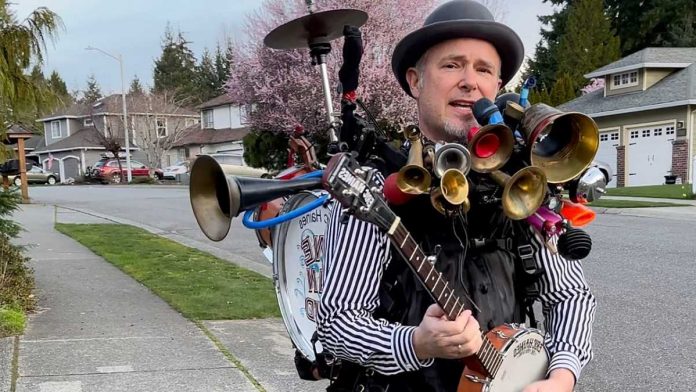 A one-man band has been bringing joy to neighborhoods during the pandemic with his mood-boosting performances.

Entertainer Eric Haines, 56, from Everett, Washington, estimates that he has walked around his neighborhood with his one-man-band ensemble 30 times since the coronavirus pandemic began.

And after many months of spirit-lifting, his performances have started receiving viral attention his neighbors think he deserves.

The idea came to Eric in mid-March of 2020, while watching Italians singing from balconies to boost community spirit while people were forced indoors during the early days of COVID.

With no balconies in his neighborhood, Eric took to the streets playing his music for the first time on March 17, 2020.

But it wasn’t until this year Eric saw his performances go viral.

A neighbor, Doug Ashe, 46, who wanted to share his love of Eric’s lockdown performances, posted footage from one of his performances in March 2021.

The video quickly received more than 500,000 views, and over the following weeks Doug shared more clips of Eric’s exploits.

READ MORE LIKE THIS: Family Deprived Of Venues To Play Their Music During Lockdown Host Drive-By Concert For Residents

With life slowly returning to normal in the U.S., Eric, who makes a living as an entertainer, plans to continue his neighborhood performances when he can.

During the pandemic he faced performance bans in his state that even put his one-man-band routines on hold some months.

But now back on the road, Eric hopes to perform to his neighbors whenever he is back.

Eric said: “I love to lift people’s spirits. I feel that it is my calling.

“People have been very enthusiastic, and a lot of people have told me it was just what they needed.

“I’ve talked to a lot of people who said the shutdown has really taken a toll on them mentally.

“They told me the one-man band made them feel happy and less isolated.”

Doug said: “It’s exciting. Each time enough time has passed that you are not expecting it again – it’s better than the ice cream man.

“He’s not in front of your home very long so it has that sense of urgency.

“You have to drop what you are doing and go outside.

“All the kids stuck at home love it.”