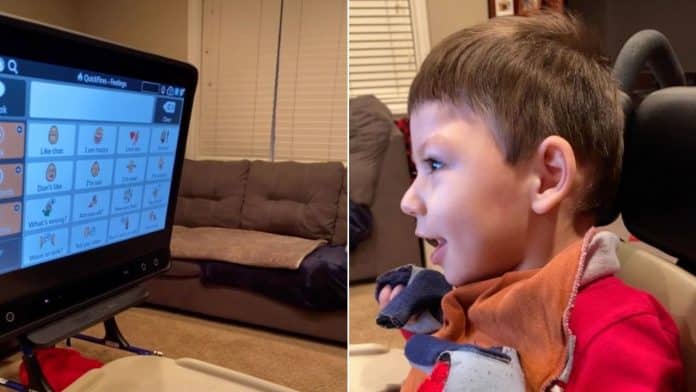 A non-verbal three-year-old brought his mother to tears as he used a specially-designed speaking device to say his first words: “Mom, I love you.”

The beautiful moment took place at the family home of Jack Malsom, 3, and his mom Angela Beltran, 34, in Portland, Oregon.

Jack was born with cerebral palsy, meaning he cannot sit, stand or walk unassisted, and his family home is filled with a number of supportive devices.

One device his family was recommended was a Tobii, a screen that registers when the user views certain words and then reads them aloud.

Jack was recommended the device by his speech therapist at Shriner’s Children’s Hospital in Portland, but due to how exhausting the Tobii can be for a new learner, the three-year-old predominantly played games to begin with, helping him build stamina.

But then, on January 14, Angela decided to let Jack use the speech setting.

Angela now admits that she was merely expecting her son to “babble” on the device, not being able to form full sentences but just to read a few words at random.

Having shown Jack how the setting worked, however, Angela – who was recording the moment – was then shocked when her son opted for his first word to be “Mom.”

And then, without any persuasion, Jack opted for the next string of words: “I love you.”

READ MORE: Teenager With Down Syndrome Screams With Joy When He’s Surprised With Golf Cart That Will Allow Him to Take Up Driving Just Like His Triplet Siblings

In the footage Angela shot, she can be heard saying her son’s name in delight, while Jack raised a loving smile.

Angela said: “I showed him where some words were, and honestly just thought he would press random words.

“I was so impressed when he chose to say, ‘Mom.’

“Then, it was like he wanted to show me he knew exactly what he was doing and said, ‘I love you.’

“You can tell by his smile after, he knew I would be super happy and impressed.

“The words weren’t even on the same page, so he actually had to navigate and purposely say it.

“And to be told for years that your child will most likely be non-verbal, is heartbreaking.

“Not just because you want to hear those words, but because you realize your child doesn’t have a voice to say their needs and wants.

“A lot of people look at kids that are non-verbal as just a body, or that they aren’t intelligent.

“It is heartbreaking to see a lot of people just look at your child and feel sorry for them.

“As Jack’s mom, I know he is so smart and has a huge personality.

“This just shows that this device is helping him find his voice.

“To hear him choose to tell me he loves me as his first real speech makes me just want to work harder as his mom, and to advocate.

“It seriously melted my heart.”