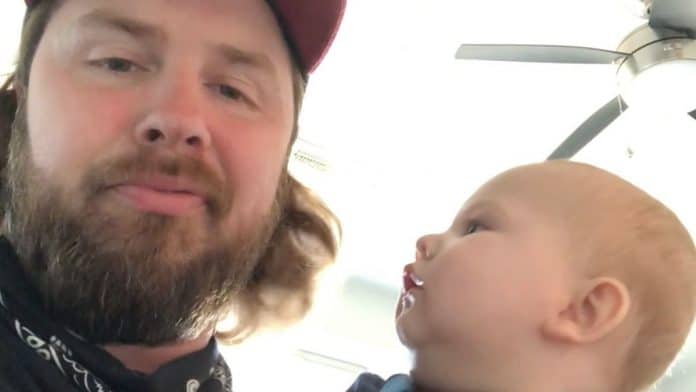 A musical dad has come up with an ingenious way of stopping his baby from crying – by beatboxing his way to grabbing the youngster’s attention.

To prove how effective his technique is, David DeVaul, 33, shot numerous videos where, right on cue, his baby Waylon stopped crying as soon as his dad starts to make a beat.

David, who has been pursuing music in Nashville, Tennessee, for 11 years, said he came up with the idea when he was trying to find a way to connect with eight-month-old Waylon, particularly when he was pining for his mom.

Waylon would often cause a fuss when he wanted his mother, David said, and he noticed that when his son was looking for her attention he would roll his lips.

So one day David decided to show Waylon his lip-rolling technique, too – a move that then developed into a full-blow beatboxing performance.

The 33-year-old recorded his first attention-grabbing performance for his son on May 1, and since then he has shot numerous occasions where this technique instantly stopped Waylon’s whining and tears.

David posted one video to his TikTok channel, where he shares clips of day-to-day life for him and Waylon.

David said: “As a musician, I use music to relate to my baby in many ways by singing to him, beatboxing, or dancing with him.

“When friends have seen this video they always comment on how attentive he is when I’m beatboxing to him.

“It completely grabs his attention.

“It’s pretty amazing to see people respond to my TikTok as a dad.

“Obviously I wanted people to respond to my music, but once a couple videos went viral for me having a relationship with my son, I thought that was so cool.

“Being a new dad is challenging and it was a shock to me that I didn’t have an immediate connection with him.

“I imagined that I would immediately be connected with my child – and especially a son, because I always wanted one growing up.

“So when he wanted his mom and I was just a guy on the sidelines, I committed to finding ways to connect with him.

“I know dads out there have felt like this, or new dads will, so I want to help dads get a creative perspective on connecting with their little ones.”