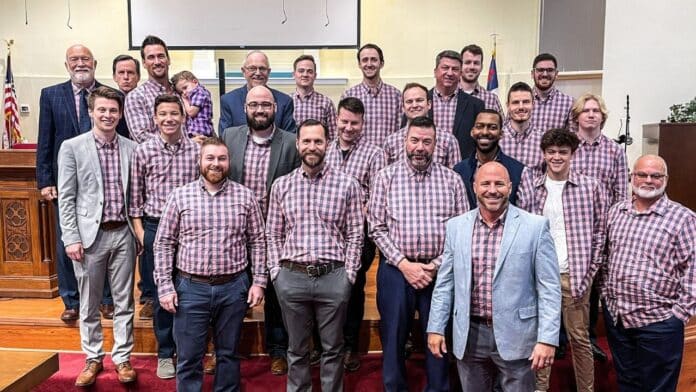 A group of churchgoing women played a prank on their husbands and partners, when they tricked them into wearing the exact same shirt to an event.

One by one the men entered the Lighthouse Baptist Church in Gulf Breeze, Florida, with each new face – and same shirt – making them clock what had happened.

In total, around 24 hubbies were tricked into wearing the same pink plaid garment on February 13, in a plan that was devised at a baby shower a few weeks earlier.

At the gathering, one of the wives mentioned the idea of buying the same shirts for all their husbands as a prank.

The upcoming Valentine’s weekend provided the perfect foil, as the wives could tell their husbands that the new pink shirt was for that event.

On the day itself, churchgoer Tamara Weatherbee, 34, captured all of the wonderful interactions on camera.

Tamara’s husband, Anthony, is the assistant pastor at the church, so he showed up early to help set up the Valentine’s event.

When Anthony saw the pastor in the same shirt he thought it was a coincidence – only to see more and more people show up in the same garment.

Speaking of the day, Tamara, who shared a compilation of videos online, said: “Anthony thought it was awesome and a good prank.

“Most of the husbands couldn’t believe they got pranked. It was hilarious.

“All in all, I think there were about 24 of them in the shirts.

“By capturing the moment on video, I wanted people to see that our church is just a fun-loving family, and that you can still have fun at church.”