Home Good News Military Mom Surprised By Marine Son As She Unwraps His Present To... 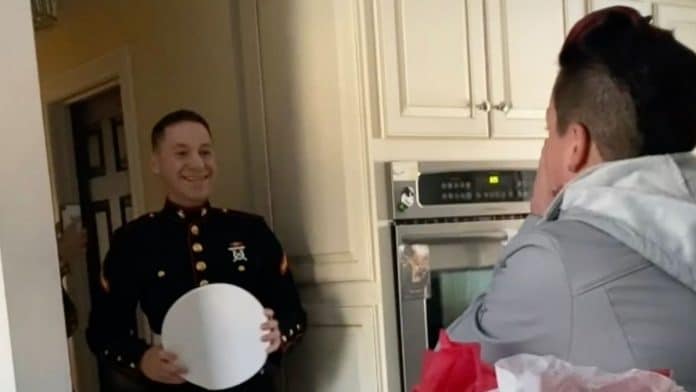 A military mom surprised by her Marine son screamed in shock and almost fainted, as she opened a gift to discover a U.S. Marine Corps hat, before suddenly realizing it could only mean one thing – her son had returned home.

The headwear, known as a cover, featured the name of Cheralyn Froio’s son, Brandon, 19, who had been on deployment for the previous seven months.

As Cheralyn, 46, inspected the cover in her Braintree, Massachusetts, home, she declared, “Ooo, I just got goosebumps.”

Before heading off on deployment, Brandon, who is a Private First Class, had not been away from home for more than five days, and he was not due to come home until March 2021.

But as his mother inspected the cover on December 19, Brandon quietly snuck in through the house behind her.

The 19-year-old had previously been in training in North Carolina and then California, and having been told in November that he was allowed to take early leave over the holidays, he reached out to friends who helped set up the surprise.

Brandon and his mother then embraced, with Cheralyn later sharing a video of the moment, shot by a friend, on Facebook.

Cheralyn said: “I gasped for air in total shock and just kept saying, ‘Oh my god!’

“I walked fast to him to hug him so tight.

“I was shaking from the shock and had to process the fact he was in my kitchen, and actually home.

“About 20 minutes after the surprise I looked at Brandon and said, ‘Oh my god– you’re home for Christmas.’

“It took a lot for it all to sink in.

“I was so overwhelmed with emotions and seeing my youngest, my baby, who has been gone for so long and had never been away from home for more than five days before.

“To be looking right at him and to be able to squeeze him so hard and not want to let go: it was, hands down, the best feelings I’ve ever experienced.”