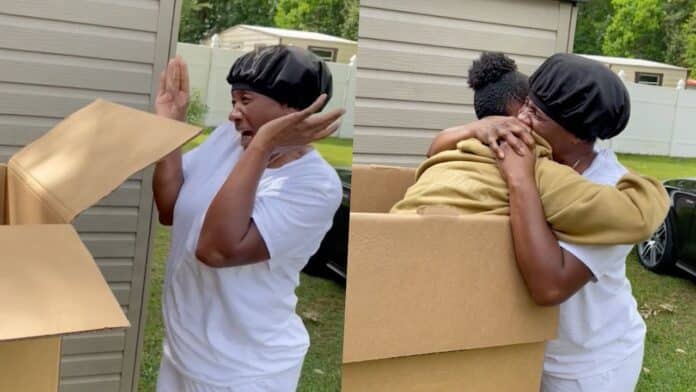 A stunned mom was left screaming in shock as she opened a giant box to discover her military-serving daughter, who she had not seen in nearly two years because she was stationed overseas.

As soon as Ruthie Patterson, 58, opened the box to discover Porsha Patterson, a sergeant in the United States Army, she immediately began screaming and then headed in for a tear-filled hug with her daughter.

Porsha last saw her family in Dothan, Alabama, in August 2020, when she moved from being stationed in Washington State to Japan, where she is still currently based.

Due to the coronavirus pandemic, Porsha was not able to take leave – something she had always looked forward to in the past, given how close she is to her family.

For 21 months, Porsha waited for news that she could return home to see her mom, which came roughly two months before her big surprise.

Having got the news that she could head home in May 2022, Porsha began to speak to her brother, a truck driver, who is rarely home but is also extremely close to his mother.

The pair worked on a plan so that they could both be in Alabama at the same time, and so they decided to surprise Ruthie on May 6, ahead of Mother’s Day.

While Porsha’s cousin distracted Ruthie, Porsha and her brother set up a giant box in their mom’s yard, and Ruthie was then called outside to check out her Mother’s Day gift.

Porsha said that while she was waiting in the box she was extremely nervous, but as soon as she set eyes on her mom, all those feeling went away.

She said: “Once she noticed it was me she was shocked and super overwhelmed with excitement and happy tears of joy.

“She even had me crying tears of joy as well.

“The response to this video has been incredibly heartwarming and motivating. I didn’t think it would go this viral.

“I just wanted share a positive video with the ones that would take the time to look because it made me and my family happy.

“My message from this story is that I hope people who have the chance to visit and go home to their loved ones take the time and do so.

“Life is too short and is moving fast. This message is not only for those in the military but civilians as well.

“Take a break and visit your loved ones.”