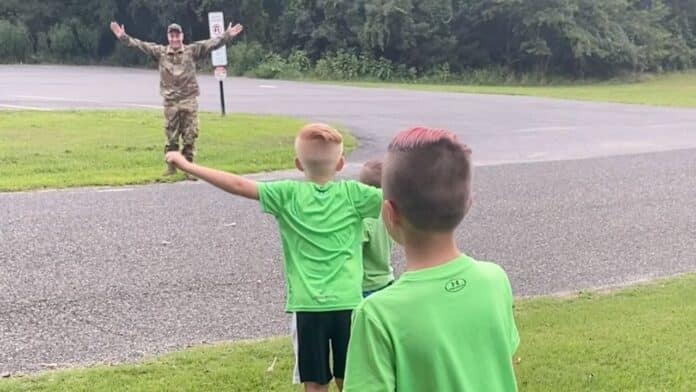 A military dad appears from behind a fire engine during a homecoming parade to surprise his unsuspecting kids after returning home from a four-month deployment.

USAF TSgt Jon Paone had been away from his wife and four kids for four months, but realtor wife Ashley revealed the family felt like they were apart for six months due to pre-deployment.

Ahead of his return on August 3 2021, Jon and Ashley, from Galloway, New Jersey, arranged a parade of vehicles from the emergency services with friends when Jon worked as an EMT.

READ MORE: Dog Mom Worried Her Husky Puppy Would Forget Her While On Deployment Greeted With Excitement

The couple’s four boys – Kaden, Kole, Kylar and Kooper – had no idea of the surprise as mom Ashely told them it was a celebration in relation to the pandemic nearly coming to an end.

The cars and trucks went down the street beeping their horns and playing their sirens before the last vehicle to pass, a fire truck with Jon hiding in, stopped to let him sneak out the back.

Therefore, when it pulled away, it revealed Jon standing in the road in front of them and as soon as it drove off the kids saw their dad and ran up hugging him.

Ashley said: “We suspected our oldest knew because he was asking a lot of questions and making comments that sounded like he knew but he was surprised the most and started crying.

“Our second oldest dropped his candy in shock while our one-year-old wouldn’t let go of him for the rest of the day.

“It feels like our puzzle is all together again.”

To continue the celebrations Jon has also organized a camping trip for the whole family.