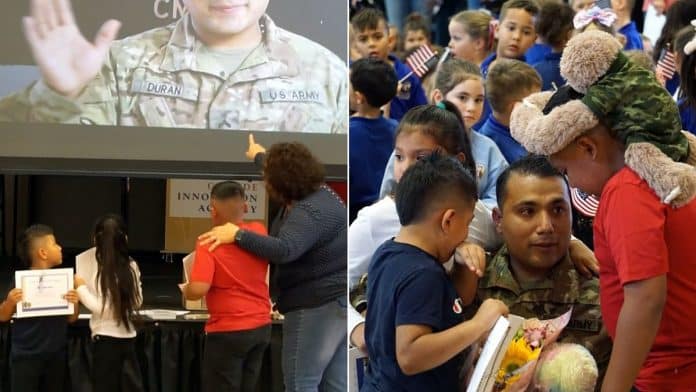 Three siblings thought they were simply picking up awards at school – only to be surprised with the greatest trophy of all as their military dad surprised them after returning home.

One by one, kids Noah, aged nine, Miliyana, seven, and RJ, five, came up on stage at The Grande Innovation Academy in Casa Grande, Arizona, on November 21.

With the children all standing at the front of the hall, a video of Ronald, an Army aviation Black Hawk crew chief, suddenly appeared on screen.

Ronald had been deployed in Afghanistan for 10 months, and the children immediately became emotional when the video of their father.

As Noah, Miliyana and RJ began hugging each other and their teachers, suddenly from behind a curtain Ronald appeared, causing the entire academy to erupt into cheers waving U.S. flags.

Ronald said: “Once I walked out to see my children this feeling of relief just swept over me.

“I could feel all my anxiety be released and all I could do was hold back the tears of joy to have them back in my arms.

“I held them tight while trying to comfort them because their tears of joy just couldn’t stop.

“That moment I felt a sense of pride to be a deployed father coming home to the ones he sacrificed for.

“To the families who loved ones could not make it home, I say thank you for their sacrifices – they are never forgotten.”